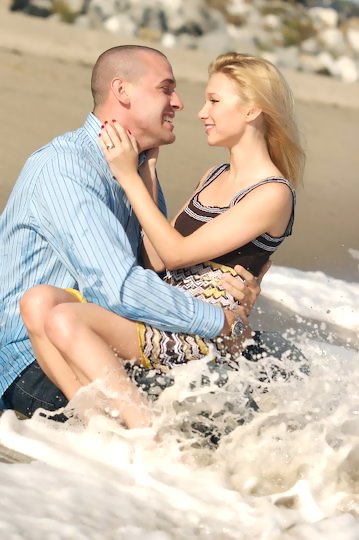 We Never Felt Too Young Make That Commitment

I met Brian when I was 16 and he was 21. He was the first respectable guy who said I was too young for him and cut off all contact with me. A couple years later he called me up and we began dating. We were married when I was 21 and he was 26.

My mother married my father on her 20th birthday. My father was only 21 and it set them up for criticism due to their ages. She said she was happy she married right out of adolescence. She explained to me that because they were both young, they grew together. They were not set in their ways.

I remembered this when I had people questioning Brian and my choice to marry at our age.  We knew it was the right decision. With that being said, I think we can both say we weren’t prime marriage material. We were both young and self centered, and had obvious flaws. Sometimes I wonder if because we were not polished and primed that is why we worked so well. Or it may be because we also were both committed to a marriage, and truly loved each other.

In our few years of marriage we have already grown so much, through our experiences together. From Brian falling asleep on the way home from work and almost getting killed by hitting a semi-truck,  coming close to losing my life and Aram’s in my pregnancy (and the PTSD that followed)- to the Adoption of Samuel and all that entailed. We are in it for the long haul.

I am so thankful I have been able to witness Brian from the beginning, without much life experience, to a man that I admire more than anyone, and is truly the definition of a hero. I hope he would agree I have also changed for the better since we’ve been together.

So, next time you want to take an easy jab at couple you consider too young to marry, just remember some of those “kids” know exactly what they are doing.

Mar 28, 2012Jamie
The Idiot's Guide to KloutHow To Kill A Migraine