What You’ll Need for Your Kids Pirate-Themed Birthday Party 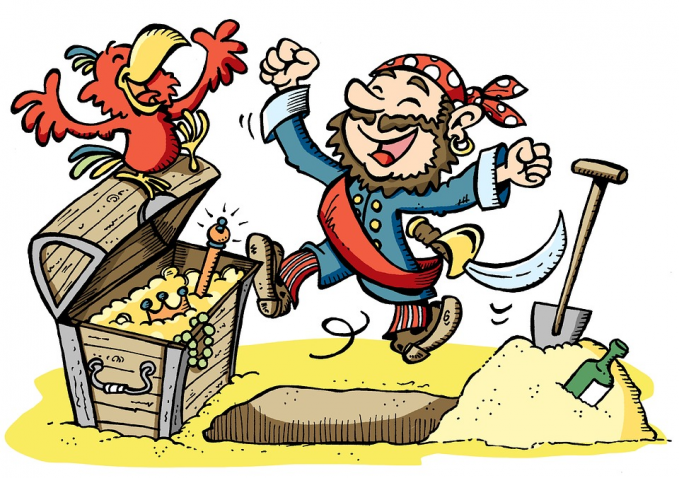 So, you lily-livered sea dogs want to host a pirate birthday party for your wee swashbuckling lad or lassy?

Arrr, hop aboard and learn the secrets to throwing a shin-dig on the high seas!

Sorry if you don’t speak pirate, but trust us, we’re here to help.

If you’re looking to host the perfect pirate themed bash for your little buccaneer, read on to find out all the tips and tricks you’ll need to make it the best birthday ever. And, a word of advice, if your kid really loves pirates that much, you should get down with the lingo – if only to watch them laugh for hours.

It’s certain that at every pirate themed birthday party you’ll find a plethora of kids with eye patches, hooks for hands, and swords. That’s all part of the fun. But kids absolutely love it when there’s an adult there acting the part of a real pirate.

If Mom or Dad has a bit of a thespian streak, they can quite easily play the part of a pirate with the right costume. If that idea sounds absolutely mortifying – have no fear!

There are plenty of affordable outlets where you can rent actors playing characters for things like kid’s birthday parties, for a fee that’s won’t cost you too many pieces of eight. Failing that, maybe Grandma or Grandpa would love to have a go – I’m sure a good pirate isn’t that hard to find!

Yo ho ho, tis there anythin as warming to a sea-stained heart than the Adventure Galley coming over that here tis horizon?!

Nigh – a little pirate won’t find anything more delightful than a pirate ship – so get cracking on some pirate themed decorations!

Look into buying or making a cardboard pirate ship cut-out and putting that up to really please your kid. Add things like skull and crossbones flags, treasure chests and inflatable palm trees to really warm the cockles of your little swashbuckler.

Musical chairs can still stand – only replace normal pop songs with sea shanties, and if a kid misses a chair… yaaaar… they must walk the plank! Pass the parcel can become ‘Pass the Plunder’ and capture the flag can become ‘Seize the Jolly Roger’. If you’re feeling pretty adventurous, make your own games. ‘Find the buried treasure’ is a great starting point for a fantastic pirate game.

Make sure the prizes are resplendent with good pirate booty yar, lest the little salty sea-warriors mutiny ‘gainst the captain.

Ahar me hearty, now is not the time to be a stingy scurvy dog – get your kid the perfect pirate costume for a birthday party they’ll never forget.

This is your little lad or lassie’s special day, so deck them out in the pirate gear of their dreams. A great costume is an exciting addition to any birthday party – and your child will feel really special when they’re decked out in the most extravagant costume there.

Lucky for you, lily-livered land-lover, there are plenty of snacks in the supermarket that’ll make a fine pirate themed spread. It’s just what you do with them.

Gold coins are the most obvious easily available snack that’ll work at a pirate party – all of a sudden, they’re not just chocolate coins, but gold doubloons! Cola bottles can simply be relabeled ‘Captain’s Rum’ (we couldn’t advise serving real rum at a child’s birthday party). Mini sausages? Peg legs. Just get creative – and watch a couple of pirate films if you need inspo.

To serve sandwiches (a kid’s party essential) use a cake-cutter shaped like a fish to them for a fab sea-themed snack, the kind that any little pirate is sure to love!