Home > WT? Facts-Holiday Edition: How on Earth Did Columbus Get His Own Holiday?

WT? Facts-Holiday Edition: How on Earth Did Columbus Get His Own Holiday? 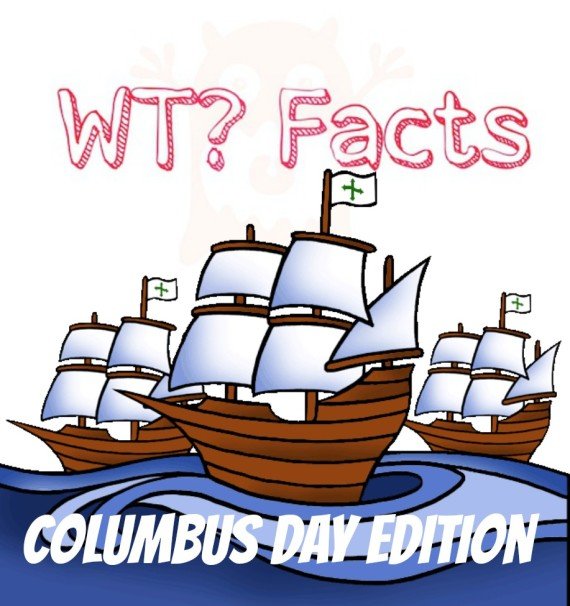 How on earth did this guy get his own holiday?

In 1492, Columbus sailed the ocean blue. He sailed without a map which is probably why he landed in the Bahamas rather than the desired destination of India.

Columbus left 39 men in Hispaniola (now Haiti and the Dominican Republic) in a stockade they had built.

When Columbus returned, he discovered that his men were dead and their stockade was destroyed.

So rather than think, “Hey, I don’t think they want us coming into their home.” Columbus decided to take the reasonable route-

He had the native people work in the gold mines in the island. Many died from the dangers of working in the mines (and in some areas where there was actually no gold to be found). There was an added threat of having their hands or noses chopped off  if the Spanish felt they had committed even the most minor of offenses… like working for free in the dangerous mines and not finding quite enough gold that day for the Spanish explorers’ liking. Or, resisting being enslaved- yeah, those kind of offenses.

He would parade dismembered bodies of natives who had attempted revolt through the streets to discourage others.

Babies would be killed for dog food if they ran low on meat to feed the dogs.

He sold young girls into sexual slavery- specifying himself that 9 and 10 year old girls were the most desirable. (I am ready to vomit as I type these words out.)

Christopher Columbus and his brothers were brought back to Spain to be charged for their crimes against the native people, but unfortunately nothing seemed to come from it because King Ferdinand (the guy who funded this whole fiasco) ordered their release.

Despite all of this, we give him his own holiday because he “discovered” America. Wait, scratch that, he was the one responsible for taking the most advantage of America. Clearly, the people actually living there or their ancestors did not count (that would just make too much sense). And never mind the Chinese fleet, Irish Monks, and Vikings (specifically Leif Erikson) that came on exploratory missions to America, let alone Amerigo Vespucci, who the continent was actually named after. I guess since they left when they were no longer welcome (the indigenous people wanted Leif and his Viking crew to take a hike, and they did) they don’t count either. Columbus was responsible for connecting America to Europe and that aided in both territorial and economic expansionism, and our capitalist society clearly seems to see that as more important than any of these other exploratory missions, and so maybe that is why he gets his own day.

Starting this year we are using this holiday to teach our children what can go wrong when our intrinsic desire for community is taken over by the desire for power, and the devastation that can occur afterward. We won’t be sticking to just Columbus as an example. For our home, it is going to be an annual genocide remembrance day.