Home > Would You Be a Surrogate to a Neanderthal Baby?

Would You Be a Surrogate to a Neanderthal Baby? 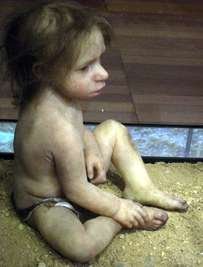 Sculpture of a Neanderthal child – the work of Elizabeth Daynès, on display at Musée National de Préhistoire, Les Eyzies. Photo by Don Hitchcock 2008.

I remember when scientists discovered an amazingly intact mammoth. I think I was around twelve years old. They announced they had plans to clone the prehistoric creature. About a decade went by and no mammoth. I started researching what happened to this long-awaited clone. Bad news. The cells of this once-thought impeccably preserved mammoth were actually very damaged.

Last week, there was a new breakthrough. A woolly mammoth was discovered in Siberia which was so well-preserved that blood was pouring out. There is now renewed hope that the mammoth cloning may be a success relatively soon. (Although there are still concerns about the condition of the cells of this newly discovered mammoth not actually being as well preserved as hoped once brought back to the lab for examination.)

Another tactic to mammoth cloning is reconstructing the genome by using modern-day elephants.  It has been discussed that this idea could possibly be used on Neanderthals (starting with the genetic blueprint of a human).

If you watched the video, yes, you heard correctly. They would need a human surrogate to clone a Neanderthal baby.

Which poses an interesting question:

Would you be a surrogate for a Neanderthal child? Also, is it ethically wrong to bring back ANY of these extinct species?

Jun 2, 2013Jamie
A Breastfeeding Story: Being Transgender and BreastfeedingHair Accessories For ALL Hair Types and Textures : A Giveaway