Here is another thing I can add to the list: “Stupid S*** People Have Said About Me”. Apparently, I’m going to be on a reality series about “Extreme Parenting”. Wait, I am? Why didn’t anyone tell me this?

I was notified of this by several posts circulating around the internet saying I’ve “signed on” to be a part of a new TV series that is currently in the bidding phase with cable networks. I’ll skip the links to these posts because I refuse to give traffic to the lies, increasing traffic and attention. At first, I thought the writers of these posts were pulling this out of their behinds. Then, I actually spoke to one of them and she explained that the show’s production team was spreading this rumor! Well, since we know the production team is prone to publicizing lies, what do you bet that sentiment will carry over into the editing room?

So, what are the facts? We were contacted? Yes, by multiple production companies. We immediately said no to all of them. I spoke with the other mothers from the TIME shoot and they all declined reality series offers, as well. I did tell one production company that a reality show about my family and attachment parenting was not going to happen, but I would be willing to work with them on a documentary special about the Sidama region of Ethiopia. They pretended to be interested, but I could hear them yawning in the background.

I know people like to vilify everyone associated with the media, but I am not one of those people.I believe there are people who really want the public to see how others live and help educate society. They want to encourage tolerance and understanding. While there have been reality series that have helped create a positive shift in the societal view of a group and lifestyle (Sister Wives is one of the few), many reality shows have had the opposite effect on society (Toddlers and Tiaras, anyone?).

Ultimately, why not be involved in a reality show, assuming the producers and editors had good intentions? It would simply be wrong for our family. We had decided early on that participating in the TIME cover photo shoot was solely about bringing awareness. Any sort of financial compensation directly related to the TIME cover would not be accepted by our family. We felt that, in light of the TIME cover, a reality series would be exploitative of our family. We also felt that it would be too much emphasis on one family, when really this should be about many families bringing this issue to light (we are one of many). And finally, we are personally not comfortable with film cameras following our family around in daily life…not to mention we’re boring. If you combine the boring factor and the fact that our family is traveling to areas I’m sure no production company would want to send a team, I think we would make an incredibly expensive and dull flop. 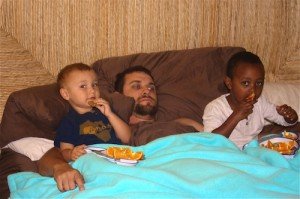 However, I believe this situation and the apparent disregard for facts is an example of how this “Extreme Parenting” series will handle its families. I don’t think the goal will be to encourage tolerance and understanding. If the families who have signed on to “Extreme Parenting” believe the show has honorable goals, I am very concerned for them.