Home > The story of my unassisted twin homebirth 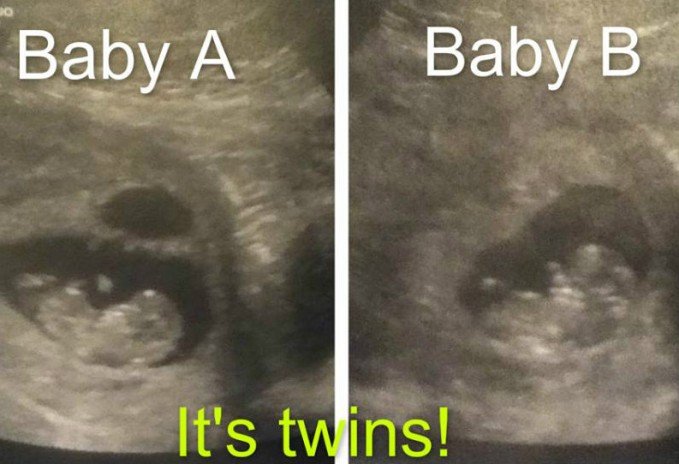 I learned early on that I was having di/di twins. This means each baby has their own sac and their own placenta. I was not excited. I spent very little of my pregnancy actually excited. Immediately, the midwives threw a whole list of twin risks at me, and told me I was risking out of their care. But no one could tell me how common any of those risks were in di/di pregnancies. As I’ve written about before, there is a huge difference between the different twin types and the risks vary greatly. The problem is that all studies are done on twins in general, nothing type specific. This lead to a lot of demands for interventions I didn’t need. After 7 months of digging through medical journals, through studies, contacting everyone in the world considered knowledgeable on twins and twin births, and piecing together very small bits of information I found no evidence that di/di twins make you any higher risk than singleton pregnancy (save a very small increase in the risk of postpartum hemorrhaging due to the extra surface area of placenta).

This is when we started to research and consider an unassisted homebirth. In the meantime, I found the only OB within an hour drive of me who would “allow” vaginal breech birth under their care. As open as he was to that idea, there was one configuration that he insisted was an automatic c-section. Baby A was frank breech (butt first) and Baby B was vertex (head down). And that’s exactly how my boys decided to settle in. I tried everything to flip either one. I tried to move B down into A position. Nothing worked.

Nearing the end of my term, my weekly OB appointments became nothing but a battle to get an extra week before having a c-section. He wanted the section to occur at 34 weeks. My gut told me they just weren’t ready. Each appointment was an attempt to schedule one, and me saying I’d wait just one more week. We really didn’t want to have an unassisted twin birth, the fears were there and we weren’t fully confident in it, but I didn’t want a c-section either. They could provide me no evidence that there were serious risks present to convince me it was necessary. Had they shown me anything that was a risk to my babies I would’ve consented on the spot.

We also were met with the problem that our hospital was a 35 minute drive away and during my last birth I went from 6cm to baby in my arms in 20 minutes. So we decided, we would prepare for a birth at home, just in case, but when active labour started we’d hop in the car, hoping to get there in time to push so they couldn’t try and bully me into the OR. We prepared physically, by buying puppy pads for the mess, cleaning supplies, towels, plastic sheeting and a few odds and ends (Oddly, I forgot to buy pads! Thank goodness for my mom who brought them after). We also prepared mentally. Though I’d had 2 natural births previously, one of which being a home birth, and though I consider myself quite knowledgeable on birth, there were still things we needed to prepare for. Signs that something was wrong, what to do in this situation or that situation. I could probably write a book at this point.

At 38 weeks my OB agreed to only “let” me go one more week but insisted I do a biophysical profile. I agreed, not realizing what his plan was. He instructed the tech to spend no more than 10 minutes on the scan. She told me she could not see enough to score it and gave both boys a failing score. Within 20 minutes they were demanding I go right to the OR, despite being completely alone. I stood my ground and asked for another scan. I know that BPPs should be scored on what is seen in a 30 minute window, per baby. was feeling normal movements, my Non-Stress Test was normal. All I wanted was a proper scan and if it showed the same results I would have absolutely consented. It took me 2 days to get that second scan. When I did, both babies scored perfect and so I went home. This was Friday afternoon. 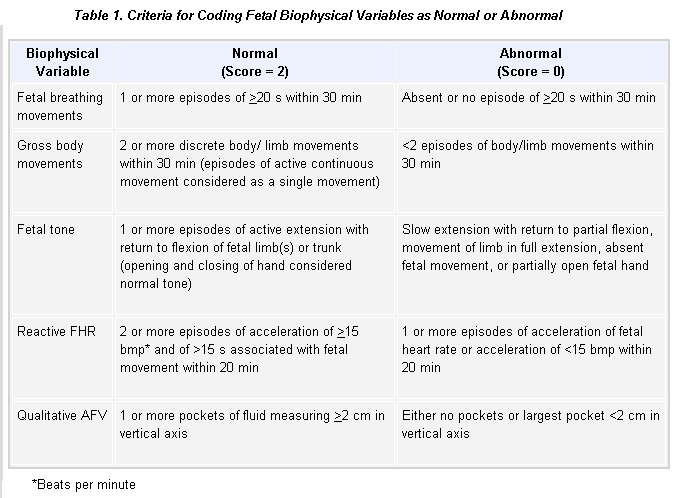 And here comes the fun part: On Sunday morning I was 38 weeks 6 days along. I had an appointment the next day and knew it would be near impossible to walk out of there without a c-section scheduled. I was so mentally drained from the long, hard pregnancy that I didn’t think I had it in me to fight any longer. I woke up to pee around 7:30am and as soon as I stood up one of my waters broke. I was excited because both my older babies were born almost en caul so I’d never experienced this before. We woke up the older kids and called my parents to come get them. I had no contractions so I felt there was no rush. My parents picked up the older 2 and I tried to eat some breakfast. That’s when contractions started. They were slow, nothing strong but I couldn’t eat anymore so I knew this wasn’t going to be long. I told my husband I was going to go get changed and we should probably get going. The walk upstairs did me in though. I sat on my bed to get through the contraction but it didn’t stop. The next hour was one lasting contraction. I was sitting cross-legged on the bed and told my husband “It’s here or on the side of the highway. Grab the puppy pads so we can save the mattress”. Still unable to move from my sitting position I suddenly felt my body pushing. Unfortunately, sitting in that position isn’t the most conducive to giving birth but I also couldn’t move. Somehow, I got myself over onto my hands and knees and that was all it took. I believe the term used is “Fetal Ejection Reflex (FER)”. My body did it all on it’s own. I never put effort into pushing. I still remember my husband saying “what do I do?” as Baby A was coming out and I instructed him just to make sure he didn’t roll off the bed. Because in the state of mind I was in, I thought a newborn baby was capable of rolling over. Seconds later, at 10:02am Tyler made his grand entrance into the world telling it to kiss his ass. My frank breech baby was out in one push. I stayed as I was for a minute, while his dad picked him up. All contractions stopped immediately and I needed to rest. It was only a minute or 2 and I was ready to roll over and meet my baby. After taking a moment to appreciate how far my husband has come, from never having held a baby before our first to being the first person to come in contact with his son, he put Tyler on my chest and the next 15 minutes were the most surreal of my life. There was I snuggling my brand new baby boy, still attached to me by his umbilical cord and yet, I was still very pregnant. 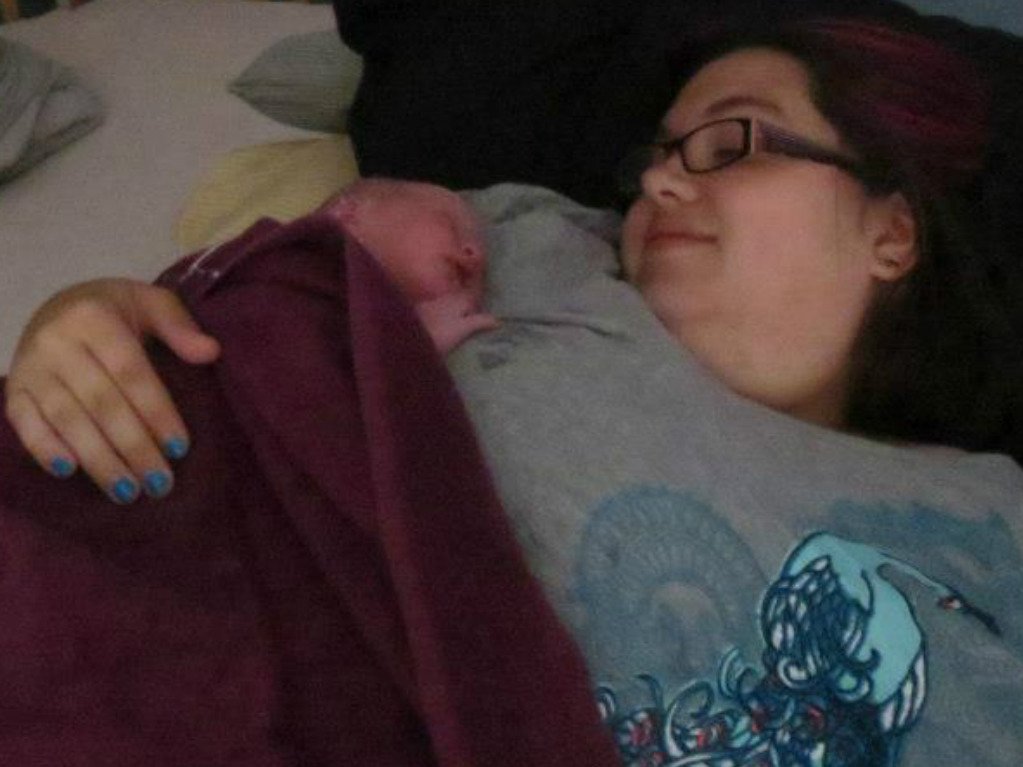 And then it was time to meet Lucas. I don’t even remember any contractions. FER kicked in again and I just remember my body pushing and me thinking “I can’t birth on my back! But I can’t move” and suddenly he was out. His water burst as his shoulders passed and thus was the end of any hope of my mattress avoiding staining. Lucas took a moment to pink up. He was breathing but just took a few rubs on the back and a little cuddle to really get him going. 10:17am and I was a mom of 4, I had 2 newborns relying on me. Not one baby, but two. 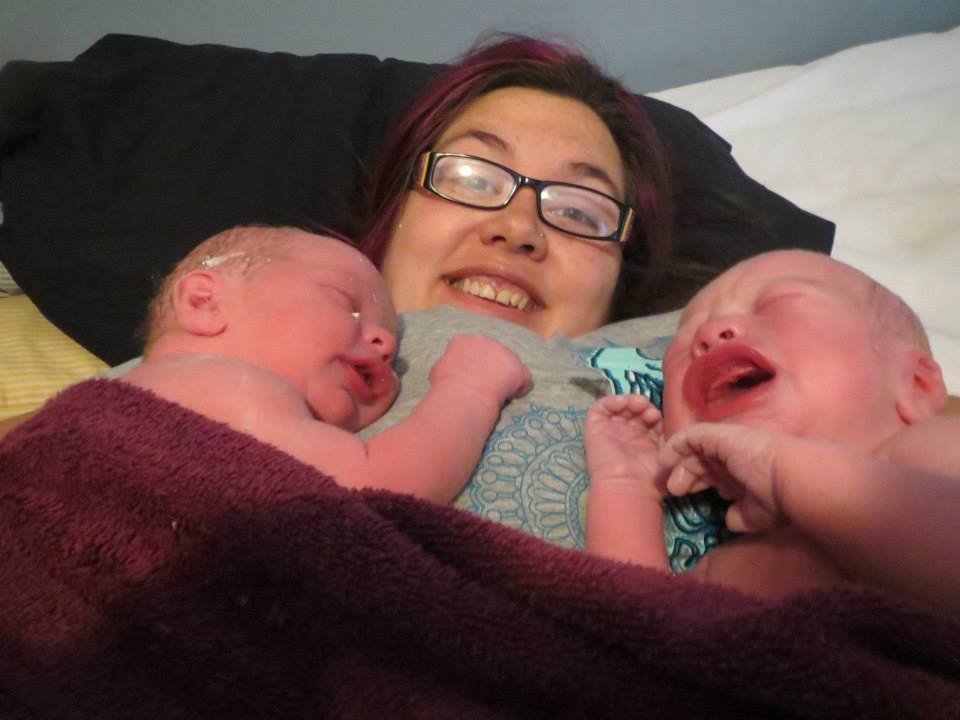 The placenta (which had fused by this point, so it looked like one but was still 2 placentas) came out with a big push around 10:45. We had some ribbon that I wiped down with alcohol wipes, we tied off the cords and cut them. My husband cut Tyler’s cord and I cut Lucas’s. This was the first time I’ve cut an umbilical cord so it was a special moment to me. Being my last born child, it was a very symbolic moment. 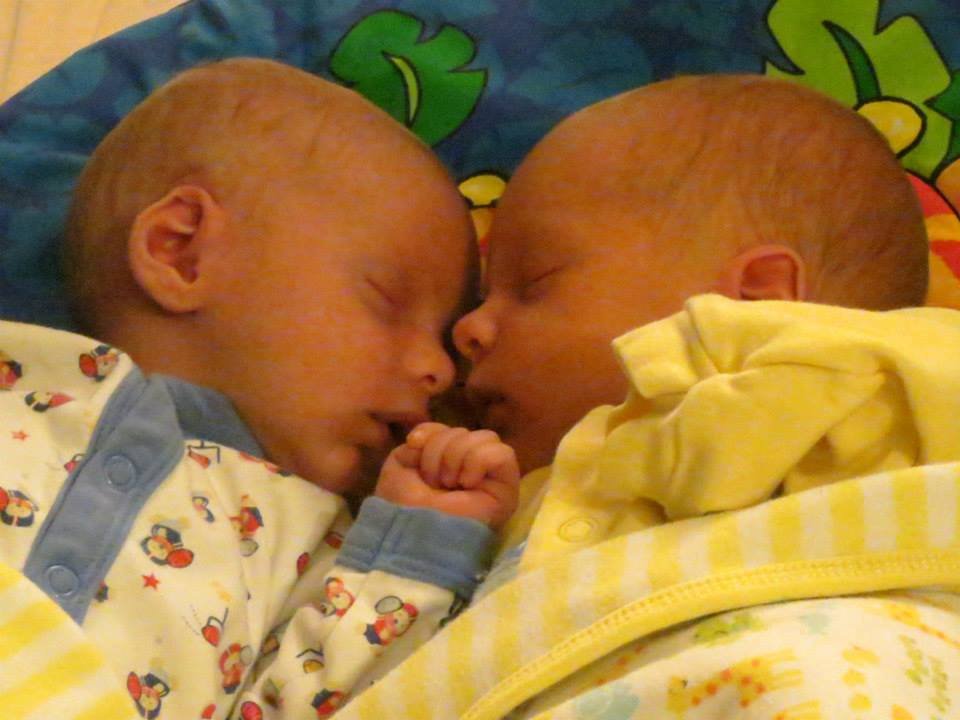 After cuddling a bit while my husband cleaned up, we called my parents to let them know the babies were here and asked them to bring the kids. They were not expecting to be bringing them home to meet the babies! They came over, everyone held, kissed and cuddled and then they took the kids back to their house for the night. The next morning I called my family doctor first thing and asked if she could give the babies a quick look over and confirm their existence so we could get birth certificates and health cards. When we arrived, all the doctors in the practice were eager to hear this story. I think every employee there peaked in the room to see the babies who were barely 24 hours old.

Everyone was given the all clear, clean bills of health all around, and we came home. That was now 7 months ago and I still look at my babies and can’t believe what an event their birthday was. Every day they get more and more perfect!

Feb 21, 2016Jamie
Your New Culinary CareerWhy A House Cleaner Is Something Any Family Can Use