Every year another Twilight movie is released and each time I announce it is going to be awful, and it pretty much is. Yet, I always end up at the midnight showing  secretly hoping what I am about to see will be enjoyable. I always have a good time, and the movies have some sort of spell over me, but I am aware that they are not good at all. There was a bittersweet moment when it all ended.

Below, I give you our most recent Twilight experience. This is a post my buddies Laura, and Julie did after we saw the final (hopefully) Twilight movie. I was going to do my own post, but I really don’t think I could ever come close to the content you are about to read.

Jamie, Spank and I saw Breaking Dawn 2 at the midnight opening at the iPic Theater in Pasadena.  Some of you remember Spank and I from our Twilight-Headed days.  It was definitely an epic experience and the end of an era.  That’s why we splurged for the fancy theater.  Not familiar with iPic?  Each seat is a cushy recliner.  Every seat gets a soft chenille blanket and a back pillow. They give you free popcorn.  There are tables in front of you with a call button so they can serve you food and alcohol while you watch the movie.  It doesn’t get any better than that.

First the three of us met up and drove to our hotel.  Charlie’s Angels Devils anyone? 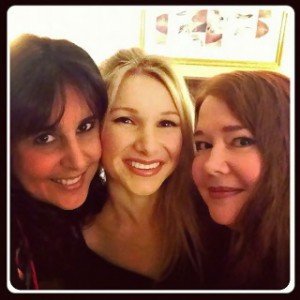 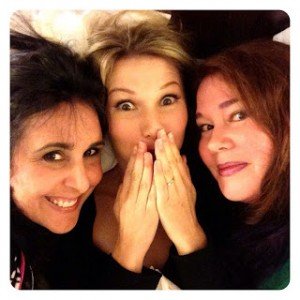 Then we had to try on the hats that our friend Carolyn sent us. 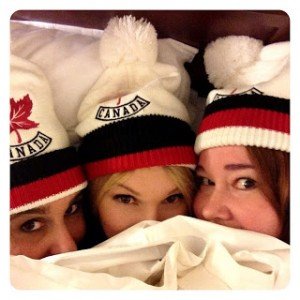 Then we went to dinner and got our drink on.  Jamie got the beer sampler.  She took this very seriously.

After dinner we headed to the theater.  Spank was preparing herself for the event. 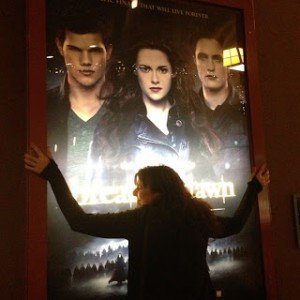 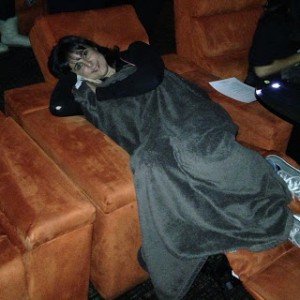 And here’s me and Jamie.  Seriously, iPic rules.  Sure the tickets are more expensive, but then you end up seeing the movie with your peers and not with crazy teeny boppers.  (my apologies to any crazy teeny boppers that read this.) 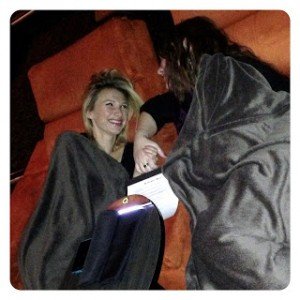 Now before Spank and I start our review of the movie, I will tell you that the movie was very riveting.  So riveting in fact that Jamie had trouble handling it.  (if you look really close, you can see her bra in the picture.  Those are very famous breastfeeding boobs!) 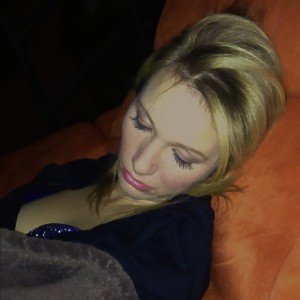 ** Warning: This movie review contains spoilers.  If you haven’t seen the movie yet and plan to, don’t read our review.

Spank:  I think we should start with the positive.

Ginger: *crickets*  Uh… the seats were very comfortable and they served us alcohol.  Lots of alcohol.

Spank: All very true, but you forgot the most important part… the series is over.

Ginger: *gigglesnort*  Don’t forget the video montage during the ending credits. That was pretty cool.

Spank: That’s true.  I actually cried during that part. Although, I’m very disappointed Buttcrack Santa wasn’t included in the montage.

Ginger: Yes, that was a travesty.  The only other good thing I can say about the movie is Charlie.

Spank:  Honestly, he has been the only consistently good thing in all five movies.  He makes every scene better.

Ginger: I concur, however, how is it when he hugged vampire Bella, he didn’t notice she was ice cold and hard as marble?

Spank: Well I never said he was observant.

Ginger: Now, shall we get to the negatives?  Why did they do Carlisle’s hair in a comb-over style?

Spank: Because he’s a grandpa now.

Spank: Since I heckled my way through Breaking Dawn Part 1, I was proud to see Jamie carry the torch for this one.

Ginger: But the difference with this time was that the entire theater was laughing inappropriately with us.

Spank: I disagree.  I think the laughter was very appropriate.

Ginger: Oh, how about that scene in the woods with Bella and the deer?  Since when do deer make pig snorting sounds?  I also was unaware that when you become a vampire, you see time lapse of flowers blooming.

Spank: If a deer snorts in the woods and no one hears it, is it bacon?

Ginger: BACON, BACON, BACON!!!  Speaking of bacon, we know who wasn’t eating it.  Edward.  It would’ve messed up his lipstick.  His shade was even darker than Bella’s.

Spank: He was wearing so much makeup, I’m surprised Reneesme didn’t call him “Mommy”.

Ginger: Oh yes, that freak of nature.  Poor girl had a mother without an ounce of maternal instinct. But FON (freak of nature) had the power to shoot straight up in the air like Mary Poppins.  WTF?  All she was missing was the umbrella.  And how was she conceived anyway?  Because all I saw was face touching and dust particles in their “sex” scenes.

Spank: I’ve seen more action in a Shrek movie. Speaking of action, what about that arm wrestling scene between Emmett and Bella?

Ginger: Well they had to give him some sort of scene.  Since he can’t carry any lines, they had him carrying logs.

Spank: Wasn’t that about the time Jamie was sawing logs?

Ginger: No, I think she fell asleep long before that.  But she was awake at the best part of the movie… when the main characters started dying.  You know it’s bad when you cheered at Jasper’s death.

Spank: Anything to cure him of his constipation.  But alas, it was all for not as we realized it was just a Dallas moment where Bobby Ewing woke up and it was all a dream.

Ginger: I think we would’ve had a much more favorable review if those people really had died.  Instead it was just like the book, a huge build-up to nothing.

Spank:  Well the movie didn’t really disappoint since nothing happened in the end, just as we suspected.

Ginger: Despite it being an epically bad movie, it was the end of an era and one we wouldn’t have missed.

Spank: It was four years of lots of laughs, great memories, quotable lines and friendships.  And now that this chapter is closed, let’s hope to latch on to a better movie franchise in the future.  Overall, the best thing about the franchise was seeing Robert Pattinson as Robert Pattinson.

Nov 28, 2012Jamie
What I've Learned This Year | 2012Christmas Stocking Project: Use Your Stockings for Good