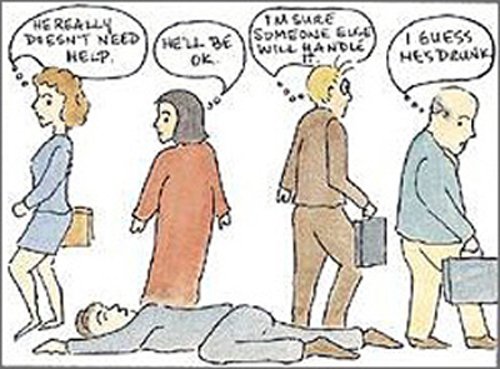 I followed the Trayvon Martin case like so many others, and I actually want to veer from the popular topic of race being discussed. Rather, I am going to focus on what I felt was an important moment in the trial that seems to have been completely overlooked.

Jonathan Manalo was a witness in the Trayvon Martin case, and his testimony stuck with me more than any other witness. Actually, just five words of it did.

“Don’t make it our problem.”

That was what he told his wife as she looked through the window after hearing something which alerted there may be a problem outside. He wanted her to stay away, and she listened for the most-part.

In Manalo’s defense, after they heard gunshots, he did eventually go outside, but by then it was too late.

I think what is troubling to me is that many people feel similarly. There is a cultural aspect of this, but also a normal psychological response called the bystander effect, and I think becoming more self-aware will help us understand why non-action is potentially hazardous (and sometimes fatal).

Many people know the story of Kitty Genovese, a women in 1964 who was killed in front of her apartment building while residents of her building did nothing to help her. The details of the story have since been disputed, but this incident launched research that resulted in the understanding of what we now know as the bystander effect and diffusion of responsibility.

The idea is quite simple:

“The bystander effect is a social psychological phenomenon that refers to cases in which individuals do not offer any means of help to a victim when other people are present. The probability of help is inversely related to the number of bystanders. In other words, the greater the number of bystanders, the less likely it is that any one of them will help. Several variables help to explain why the bystander effect occurs. These variables include: ambiguity, cohesiveness and diffusion of responsibility.” –Source

The irony is that I think George Zimmerman did not seem to suffer from the bystander effect, and unfortunately, his misplaced idea of reacting to something that needn’t be reacted to may have resulted in the death of a teenage boy.  So, this is a lesson to be learned in not allowing ourselves to feel diffusion of responsibility, while also reacting appropriately for each individual situation.

Another interesting note is that, depending on many variables, each human man may have a fight or flight response. Bystanders may very well be more inclined to a “flight” kind of a response while non-bystanders may feel the need to confront or “fight”.  Neither one is better than the other, but we need to know that even if we feel we are in the “flight” category, and confrontation is too dangerous for us, we can still react and not stand by while something happens, out reaction just may be different than a person who has a reaction to fight.

Women, on the other hand, lack the SRY gene that males have on their Y chromosome which is thought to release norepinephrine in the blood stream, thus triggering the fight or flight response. Research has shown women are more likely to have a “tend to befriend” response to stress, and I’m not sure how that would change our reaction to something like this, but I am wondering if that response is why Manalo’s wife was the one to initially look out the window and keep checking throughout the night, while Manalo wanted to just stay away completely.

Here are two videos I thought went well with what I’ve been thinking about.

The first is an ABC “What Would You Do” where they actually test out the bystander effect with an orchestrated childhood abduction. Watch the reactions, and if you’re like me, you’ll be in tears by the end of it when three young men, whom I’m sure are negatively profiled on a regular basis are the only ones that end up assisting this little girl.

And here is a recent story about two teens who went after a child abductor on their bicycles. A happy ending!

Jul 18, 2013Jamie
Best cities in Canada for a weekend with the girlsA Breastfeeding Story: It's Not All Fun and Games At First