2008 was a tumultuous year for many. The stock market and real estate market tumbled. Aggregating all the financial losses sustained worldwide would never come close to the great loss our family suffered. We lost my granddad and dad unexpectedly within 6 weeks of each other. However, we saw light at the end of the tunnel – baby Jordan was due in late November 2008. His arrival would mark the turning of the bad luck tide for our family. Everyone put a lot of hope in his birth. We needed the breath of fresh air that only a new baby can provide.

Jordan Douglas was born on November 24th at a healthy 9 lbs 7 oz. He was beautiful, calm, sweet, and nursed like a champ. We were discharged on Thanksgiving morning, which was just another sign that our bundle of joy was the complete package of hope and new beginnings. On day two of our happy homecoming Jordan felt a little too warm for comfort. Our baby had a fever, a low-grade one, but a fever nonetheless. I quickly learned that infants with fevers earn a direct trip to the Pediatric ER.  One lumbar puncture later we were faced with the first doctor/ parent meeting of many to come. Jordan was apparently very sick and immediately admitted to the local Pediatric ICU (“PICU”). He was there for eight long days with Mama at his bedside, while Dada was at home taking care of big brother Jacob.

Jordan was hooked up to monitors 24/7, but that did not stop us from nursing and cuddling. The nurses quickly learned that the beeping alarms in Jordan’s room were not alerting them of a medical emergency, but rather of an intimate bonding and nursing session. Ever so patiently they would rush into our room to reattach Jordan’s monitor leads, help us get comfortable in the chair and stand back to admire the sight of a worried mother calming her sick child. After yet another lumbar puncture the doctors deemed that his infection was under control and was no longer a threat to his life, so a second hospital discharge was in our future. 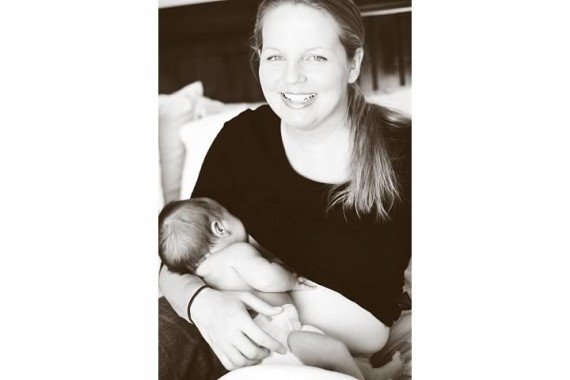 We were thrilled to once again have our little family reunited. Life moved in slow motion as we adjusted to being a four-member family. But even this quiet bliss would come to a halt two days later, when Jordan stopped nursing at 9:00pm and refused to nurse for the rest of the night. The morning of December 5th Jordan went back to the Pediatrician’s office so he could listen to his lungs. Jordan had started breathing slightly labored over the past day, and in my hormonal postnatal fog I thought that he might have caught an upper-respiratory bug at the hospital. The Pediatrician took one glance at him, had the nurse call 911 and grabbed a tank of oxygen in his storage room. We were rushed by ambulance back to the local hospital where they put him on a respirator. An x-ray revealed that his heart was enlarged, which was more critical and complex than they felt comfortable treating there. We were airlifted to a university hospital an hour away later that evening. I flew with Jordan in the helicopter, while Dada raced down I-95 with my breast pump and suitcase packed for an undetermined amount of time.

A crystal ball at that crucial time would have revealed that we would spend the next six weeks in the PICU. We would struggle through Christmas, New Year’s Eve and two birthday celebrations confined to a small 10’x12’ PICU room. I moved into the Ronald McDonald house on campus, but sat bedside by Jordan all day and most nights. Dada and Jacob held down the home front and came down to visit us every chance they got. Jordan was on the roller coaster ride of his life, some days he was cruising along only to be caught off guard by a huge dip in the track. There were days and nights when the nurses and doctors cautiously celebrated his small victories, but reminded us that our little boy was very sick. Jordan’s chart grew thicker and he was the main topic of conversation at the weekly PICU conferences, but for each passing day he was loved more and never left alone in the hospital.

I pumped breast milk every 3-4 hours around the clock. The doctors emphasized the importance of Jordan receiving breast milk in his feeding tube. Every person new to the case reminded me that I had to take care of myself so the stress of the situation would not adversely affect my milk supply. A few of the nurses expressed their doubts that Jordan would ever be able to nurse again after being intubated for so long. I was determined to play an active role in his healing, so I turned a deaf ear to any negative comments – and kept pumping as if my son’s life depended on it – because it did!

The moment Jordan came off the respirator he started to cry, a sad horse sound emerged from his throat. He was inconsolable, getting all his built up emotions out in one good cry. I asked the nurses if I could give him a pacifier. They told me that he might not take it, because being on the ventilator may have affected his sucking reflex. Anxious to comfort my child I gave him a pacifier, and he took it! He kept it in his mouth and stopped crying immediately. It was a moment of great mommy intuition success for me. Next step towards recovery and discharge was for Jordan to successfully feed, either by bottle or at the breast. He made it clear to everyone that he had no interest in the bottle. The nurses were apprehensive about allowing him to nurse before he had proven that his swallowing reflexes had not been damaged. In other words, he had to take a bottle before he could be allowed to nurse. After a heart to heart conversation with his cardiologist, I was given permission to try to nurse Jordan, but not in a private intimate setting.

Jordan’s nursing performance would be witnessed by several nurses, a cardiologist, a speech therapist, respiratory therapists and a lactation consultant. Mothers are exceptional beings. We can grow life and feed our young without taking our own comfort (or need for modesty) into consideration. I vividly remember sitting down in the big hospital issued recliner, having the nurses place pillows under my elbows and in my lap, gently laying him in my arms and quietly aiming him towards my right breast. He turned his head, looked up at me for a brief moment – before he latched on! He nursed for the first time in over a month as if, our nursing relationship had never been interrupted by his fight to live.

Healing prayers from around the globe spanning across every religion were sent to Jordan. Congregations in churches and temples gathered and prayed for him. Friends and family mentioned his name in their prayers at night – and throughout the day for added effect. I specifically recall at least five occasions where I begged Jordan to hang in there, promising him that life would be beautiful and special if he could only pull through that night. He proved to be a fighter and in the end a winner.

Jordan had his third and final hospital homecoming a few days before his two-month birthday.  He was discharged on a medication schedule that gave me a pharmaceutical crash course. Jordan required four hours of infusions daily for six weeks, weekly infusions for six months and daily medications seven times around the clock. His social calendar included ten different specialists, most of them located at the university hospital. Jordan and I spent countless hours in doctors’ offices, which we turned into special Mama and Jordan nursing and play time.

Our family learned that “knowledge is power”; we followed instructions, prescriptions and recommendations. We learned medical terms and conditions and we made life-long friends throughout the heart community. We embraced our life and adjusted to “the new normal”. Jordan and I got caught up on all our missed opportunities to cuddle and bond. We went on to nurse successfully for another 22 months!

Days turned into weeks, weeks turned into months, and now we find ourselves almost five years out from Jordan’s diagnosis. Jordan is a thriving, fun-loving and charming preschooler. He has no deficits and he adores his brothers, Mama and Dada. The world did NOT come to a screeching halt the day Jordan got sick, life did not become less enjoyable after his diagnosis, on the contrary we are now a stronger family than before. Our three (soon to be four) boys are learning to live life to its fullest, and we are all finding HAPPINESS in even the smallest and simplest things! We “heart” happiness!

Nov 5, 2013Jamie
Real Men of AP: Out in the World!I Stopped Buying Clothes and Highlighting My Hair