Confused by the toddler’s needs, the dispatcher followed procedure and sent a Deputy out to the location.

Deputy Martha Lohnes responded. When she arrived, Aliyah’s grandfather answered the door, confused as to why a police officer would be standing in front of him. Then Aliyah sauntered to the door with her pants half on, happy to see her help had arrived. 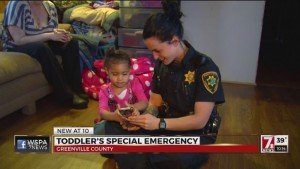 Deputy Lohnes decided to stay and offer Aliyah help after all stating that in a job where she sees tragedy all too often, the opportunity to experience a moment of a child’s innocence was welcome in her day.

I just ended up sitting down on the stairs helping he put on the rest of her pants and then it was almost like a reward, she just wanted a hug

Mom, Pebbles Ryan, said she was was surprised Aliyah called 911 but has spoken to her about how to find the numbers on the phone in an emergency.

Deputy Lohnes was happy to make the call

I thought it was awesome that at two years old, she knew to call 911 at all