To Assume Makes an Ass out of (Yo)U and Me 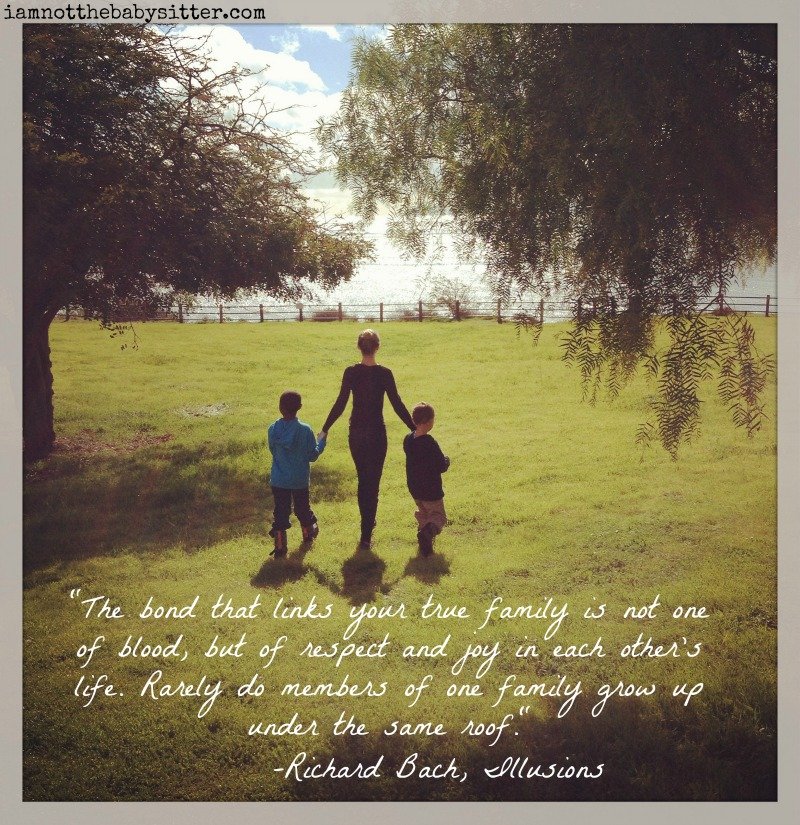 Oh, I remember the days when everyone and their mother was writing articles about this blog without actually reading it. A total lack of understanding for the term “attachment parenting” caused very odd outbursts from journalists against my blog’s name. It was very creepy how they described it as some sort of weird mantra we “attachment parents” *must* have because *all* AP mothers “must stay home” and “refuse childcare”…

Except, the name behind my blog is meant to be a joke, but the reason it was named I Am Not the Babysitter is not funny at all. Actually, it has become a real issue lately. I was never mistaken for my child’s nanny or babysitter before we adopted Samuel. When Samuel came into our family, that instantly changed. No one ever thought I was either one of the boys’ mother. I have some other adoptive parents who have either been mistaken for their child’s nanny or grandparent. I have never been mistaken for a sister or aunt, but babysitter happens on a daily basis.

I understand that people get confused because the boys are clearly two different races. However, that, by no means, should be a green light for strangers to make assumptions and start addressing us like they understand the dynamic of our relationships.

This was less of a problem when the boys were younger, but now that they are older and extremely perceptive, they are constantly watching and absorbing information, even if they aren’t involved in the conversations around them, and therein lies the problem. When people start speaking to me like the babysitter of my children or ask about the boys’ parents, Samuel and Aram take note and start asking me why they don’t think I’m their mom. It hurts the boys. The issue I have is that it tries to diminish my role as their parent, and that is exactly how the boys have been receiving it. There is absolutely nothing wrong with being the nanny or babysitter of children, but that role is different than a parent, and my children know their babysitters and love them, but they also know there is a huge difference between mom and dad and the people who watch them while we are not there.

I don’t mind when people ask if the boys are my children, especially if it is relevant to our conversation. However, that rarely happens. Here are some recent scenarios that have made the boys start asking a lot of questions about our relationship and why people don’t understand I’m their mom:

Shopping at a different Whole Foods than normal-

Grocery store clerk: “Do you also cook for the family you work for?”

GSC: (looking at the boys and back at me) “Your job, do you cook for the family, too?”

Lady at the park: “Do you work weekends? And how much do you charge per hour? I’d love for you to watch my kids.”

Lady at a different park: “You are so attentive, the families you work for are lucky to have found you.”

Lady at the beach (said half-joking- we were talking for a few minutes about the boys and she still had no clue I was their mom): “I mean this as a compliment, but I would never hire you, I make sure the women watching my kids are old and fat.”

…And because she said this in front of Samuel, he then asked me why the lady only wanted “old fat people” to work for her. *shaking my head*

Anyway, you get the idea.

The message I want to get across to people is that it is normal to try to categorize and compartmentalize what we see, including people and their relationships. However, it is wrong to make assumptions and then express them openly (especially in front of children) before verifying if your assumptions, are in fact, accurate.

Be considerate and go ahead and ask a question if it is will help you communicate better with the person you are speaking with. Building relationships does require an exchange of personal information and you shouldn’t be scared to ask questions in a manner that is not invasive or offensive.

….And always remember it is never okay to speak to someone like you understand their life or family situation prior to getting to know them.

“Stereotypes are devices for saving a biased person the trouble of learning.”