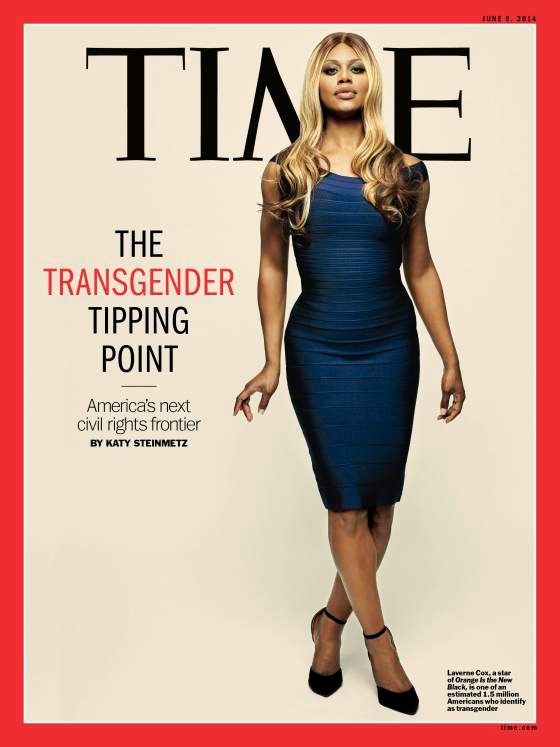 Cox took to her Facebook wall to address the importance of the cover:

“I realize this is way bigger than me and about a tipping point in our nation’s history…where it is no [longer] acceptable for trans lives to be stigmatized, ridiculed, criminalized and disregarded.” (Incidentally, this can be said for any human right that is stigmatized in our culture. Times – they are a changin’…hopefully.)

Earlier this year, Cox did an interview with Katie Couric that went viral when she responded to Couric’s questioning that she felt was out of line: “I do feel there is a preoccupation with that. The preoccupation with transition and surgery objectifies trans people,” the actress told Couric.

“And then we don’t get to really deal with the real lived experiences. The reality of trans people’s lives is that so often we are targets of violence. We experience discrimination disproportionately to the rest of the community. Our unemployment rate is twice the national average; if you are a trans person of color, that rate is four times the national average. The homicide rate is highest among trans women. If we focus on transition, we don’t actually get to talk about those things.”

With slowly growing acceptance and understanding of the LGBT community in society, the “T” is often considered the area where confusion and phobia still remain quite high.

Even though Cox is one of the most outspoken transgender figures in the media today, she has even mentioned that this is much bigger than one person. The collective efforts by families and individuals who are trying to teach others about what it means to be transgender has been overwhelming.

This week, a video made by the Whittington Family is captivating hundreds of thousands of people on Youtube. The story follows their son Ryland, born female, from infancy through the beginning of his transition around age five or six. Unfortunately, the comments and voting features have been disabled on Youtube, which reminds us all that although people are going out of their way to educate others and create a more tolerant society, society is still not changing fast enough.

May 30, 2014Jamie
Mother Sentenced to Death for Apostasy Gives Birth in ShacklesWhy Have Preschool Graduation? For Moments Like This...