We initially started our “Real Men of Attachment Parenting” series as a joke. Our friend Maria started the AP Ryan Gosling series, and we wanted to create an online rivalry between our “real men” and the fictitious online Ryan Gosling character.

The series morphed into what is now a playful and touching look inside families with present fathers. AP is such a fluid concept that even if people don’t identify as attachment parents, any “present” parent who validates the needs and feelings of a child as a human being is an attachment parent, which is almost the entire population. So really, this is a series that is less about specific parenting practices (although baby-wearing is very present in many of the submissions) and more about celebrating fathers. The role of present fatherhood has been overlooked in our society as important to families (aside from contributing financially).

Like with the title of my blog, which started out as a joke, this has also escaped my control and turned into something much bigger and more beautiful than I could have imagined. 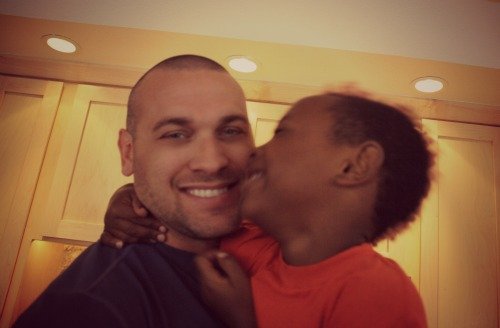 The Leakyboob joined forces with Beco to offer an article for fathers or partners who have breastfeeding partners and featuring the Real Men of AP series. (The article also features a giveaway to win a Beco Soleil.)

A Real Men of AP tumblr was created to celebrate fatherhood.

And now instagram and our #realmenofAP hashtag have started to be used by others to help showcase present fathers taking an active role in their child’s life.

Again, this normalizes the idea that present fathers are more than just financial providers. There is nothing extra special about a present, loving father, but society has made it seem like this is the case. So, these images and accompanied stories will show that this is not unique behavior, but should be considered the standard for fathers, just like it is for mothers.