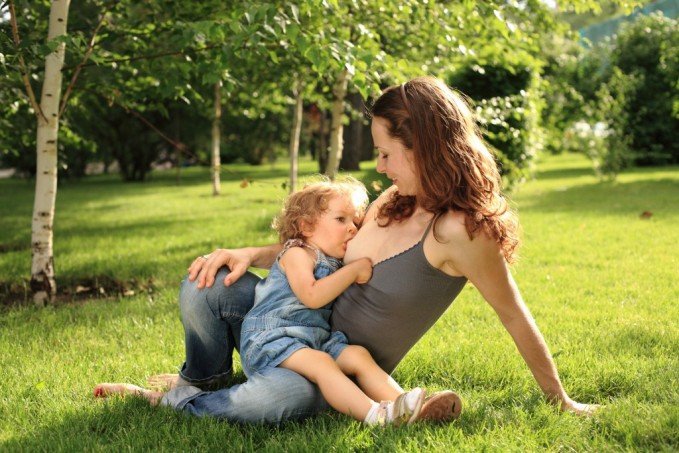 by Katherine Dettwyler, PhD
Department of Anthropology,
Texas A and M University 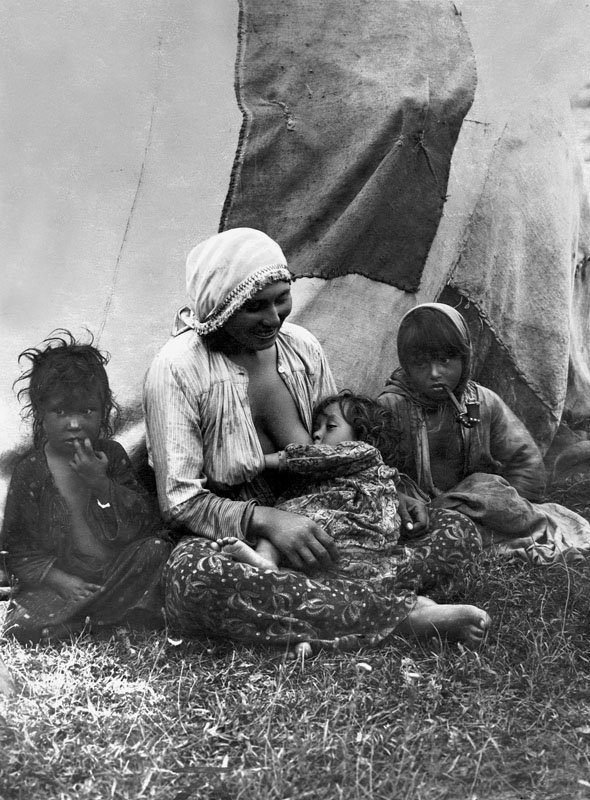 The photo form the 1930s shows a Roma woman breastfeeding a child. In the grass near her are two other children.

A Natural Age of Weaning

My research has looked at the various “life-history” variables (such as length of gestation, birth weight, growth rate, age at sexual maturity, age at eruption of teeth, life span, etc.) in non-human primates and then looked at how these variables correlate with age at weaning in these animals. These are our closest relatives in the animal kingdom, especially gorillas and chimpanzees, who share more than 98% of their genes with humans. I came up with a number of predictions for when humans would “naturally” wean their children if they didn’t have a lot of cultural rules about it. This interest stemmed from a reading of the cross-cultural literature on age at weaning, which shows that cultures have very different beliefs about when children should be weaned, from very early in the U.S. to very late in some places. One often hears that the worldwide average age of weaning is 4.2 years, but this figure is neither accurate nor meaningful. A survey of 64 “traditional” studies done prior to the 1940s showed a median duration of breastfeeding of about 2.8 years, but with some societies breastfeeding for much shorter, and some for much longer. It is meaningless, statistically, to speak of an average age of weaning worldwide, as so many children never nurse at all, or their mothers give up in the first few days, or at six weeks when they go back to work. It is true that there are still many societies in the world where children are routinely breastfed until the age of four or five years or older, and even in the United States, some children are nursed for this long and longer. In societies where children are allowed to nurse “as long as they want” they usually self-wean, with no arguments or emotional trauma, between 3 and 4 years of age. This interest also stemmed from the realization that other animals have “natural” ages of weaning, around 8 weeks for dogs, 8-12 months for horses, etc. Presumably these animals don’t have cultural beliefs about when it would be appropriate. 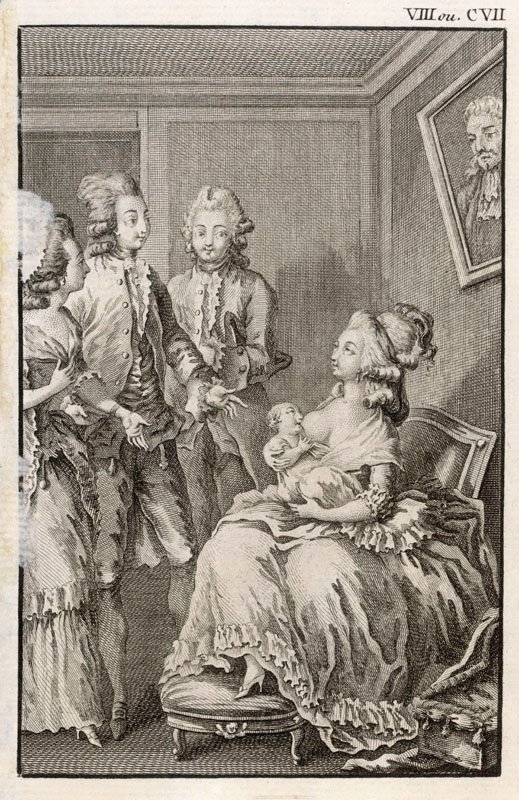 Some of the results are as follows:

1. In a group of 21 species of non-human primates (monkeys and apes) studied by Holly Smith, she found that the offspring were weaned at the same time they were getting their first permanent molars. In humans, that would be: 5.5-6.0 years.

2. It has been common for pediatricians to claim that length of gestation is approximately equal to length of nursing in many species, suggesting a weaning age of 9 months for humans. However, this relationship turns out to be affected by how large the adult animals are — the larger the adults, the longer the length of breastfeeding relative to gestation. For chimpanzees and gorillas, the two primates closest in size to humans and also the most closely genetically related, the relationship is 6 to 1. That is to say, they nurse their offspring for SIX times the length of gestation (actually 6.1 for chimps and 6.4 for gorillas, with humans mid-way in size between these two). In humans, that would be: 4.5 years of nursing (six times the 9 months of gestation). 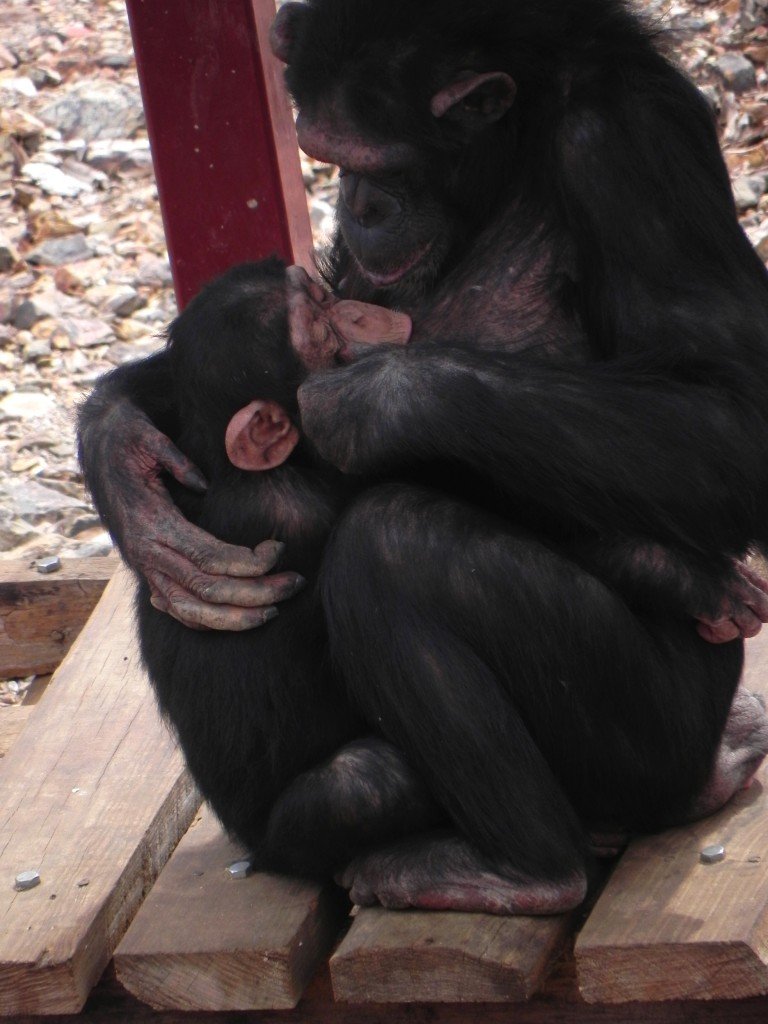 4. One study of primates showed that the offspring were weaned when they had reached about 1/3 their adult weight. This happens in humans at about 5-7 years.

5. A comparison of weaning age and sexual maturity in non-human primates suggests a weaning age of 6-7 for humans (about half-way to reproductive maturity).

6. Studies have shown that a child’s immune system doesn’t completely mature until about 6 years of age, and it is well established that breast milk helps develop the immune system and augment it with maternal antibodies as long as breast milk is produced (up to two years, no studies have been done on breast milk composition after two years post partum).

And on and on. The minimum predicted age for a natural age of weaning in humans is 2.5 years, with a maximum of 7.0 years.
(…)

Clearly, babies born in the U.S. don’t have to contend with all the diseases and parasites and contaminated water that babies in developing countries do. We have more supplementary foods that we can generally trust to be safe and clean. We can get our children immunized, and get them antibiotics for infections when necessary. The fact that we *can* does not mean that breastfeeding is unimportant. I hope this has been of help. These ideas are developed much more eloquently and in much greater detail in my chapter “A Time to Wean” in Breastfeeding: Biocultural Perspectives

being published by Aldine de Gruyter.

Jul 30, 2015Jamie
The Geekiest Newborn Photos on the InternetPolitics and Breastfeeding: Argentinian Politician Breastfeeds during Parliament