This post was written by Kendall Hoover (SEO and editing genius)….

I have to tell you something: I love Jamie Lynne Grumet.

Here’s the thing though, did you know that her parents named her? The gave her her first two names, but her husband gave her her third name, so now her name is Jamie Lynne Grumet.

I met Jamie when she thought I was spam on her blog. But, I’m not spam. Jamie didn’t even care if I was spam, though, because she needed an editor so badly. 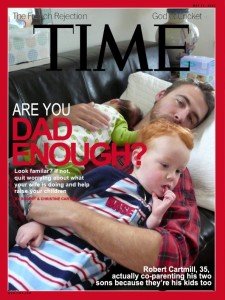 Photo of Robert Cartmill, taken and edited by Christine Cartmill

Jamie Lynne Grumet was on the cover of Time magazine in May of 2012. It was a great thing for her to do — it started a lot of great conversations about important topics, but it also started a lot of icky conversations by a lot of mean people who have nothing nice to say about anyone. This has been hard on her family because sometimes mean people get high rankings in Google, so unsuspecting people read evil propaganda instead of encouraging and educational information, like the blog posts that Jamie Grumet writes.

Jamie Lynne Grumet writes about things like Ethiopian adoption and breastfeeding a toddler. She started a great series to support and encourage dads called “The Real Men of AP“.

My favorite project of Jamie Grumet’s is the clean water project that she organized to benefit Argisa, Ethiopia. Over 8,000 people received clean water in December of 2012 and 12,000 more will get water in March of 2013.

Jul 29, 2012Jamie
Bottle Feeding, Breastfeeding, Famine and a CALL TO ACTIONCountdown to the African Adventure Begins!