Home > The Best Time to Travel to San Diego

The Best Time to Travel to San Diego 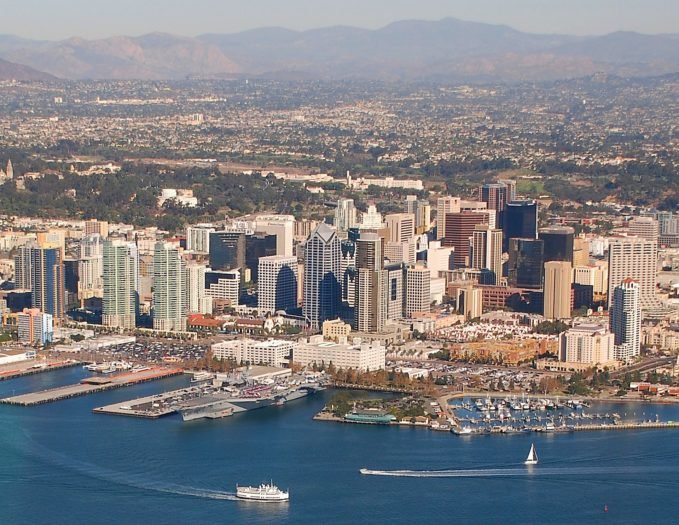 Known as “America’s Finest City,” San Diego is defined by its pleasant climate and mild temperatures. Featuring beaches, mountains, and desert, the city’s versatile natural scenery attracts outdoor enthusiasts much of the year.

But the best time to visit will largely depend on what types of activities interest you. The city hosts a wide variety of cultural events that celebrate the arts, pop culture, craft beer, film, and much more. And let’s not forget that San Diego is one of the top surf destinations in the United States.

Read on to find out the best time to travel to San Diego and plan the trip that best suits you.

Spring is a fantastic time to visit San Diego as the rainy winter months begin to fade. Although March is one of the rainiest months of the year, showers subside later into the season.

San Diego’s diverse landscape shines this time of year and flowers begin to bloom in April. Average high temperatures reach the high 60s and this is an excellent time to hike the city’s mountain peaks such as Cowles Mountain.

The city hosts lots of events that celebrate the arrival of spring and the streets are filled with fun activities.

Spring is an excellent time to find reasonable rates on airfare and accommodations. Crowds are not as intense as peak season, especially during March and April.

With little rainfall and average high temperatures peaking into the mid-to-high 70s, this is the ideal time to soak up that San Diego sunshine. While “June Gloom” hangs around the early part of summer, July and August are the two driest months of the year.

Locals flock to the outdoors, while tourists rush into the city in waves to enjoy the fabulous weather. Nature lovers have a myriad of outdoor activities such as biking, hiking, sunbathing, snorkeling, scuba diving, kayaking, and paragliding.

San Diego hosts an abundance of festivals during the summer, drawing large crowds to the area. The main event is July’s Comic-Con, attracting well over 100,000 attendees. If you travel to San Diego during the event, be aware that most accommodations will be sold out months in advance.

Other notable summer festivals in San Diego include:

Due to the surge of visitors, flight and hotel prices are highest in San Diego during July and August. You may want to schedule your trip another time if you’re traveling to San Diego on a budget or wish to avoid crowds.

Fall is a special time to visit San Diego due to its unbeatable balance of fantastic weather, fading crowds, and entertaining festivals.

With the enormous beach crowds mostly gone, fall is a delightful time to partake in cultural attractions. Whether you’re a foodie or film buff, there’s bound to be numerous events that pique your interests.

This is a golden time to visit San Diego without having to shuffle through unbearable peak season crowds. Although summer crowds persist into September, October and November are when accommodation prices begin to drop.

Although San Diego is not synonymous with a winter wonderland, it’s a good place to be for mild temperatures. Average highs hover around the 60s and lows tend to stay in the low 50s, high 40s. San Diego experiences consistent rain this time of the year, which makes a trip to the beach unattractive for most visitors.

Daring surfers willing to brave the chilly water temperatures can surf the biggest swells of the year coming from the north. Crowds at the beach are non-existent and winter can be an exhilarating time for seasoned veterans.

San Diego may not be covered with snow, but the city embraces the holiday spirit with fun-filled activities during the season. Witness colorful lights, listen to festive music, visit museums, and attend numerous parades for all ages.

For nature enthusiasts, winter is whale watching san diego season and you’ll have the chance to spot migrating gray whales. If you’re prone to seasickness or prefer to stay on land, there are several spots to scan the ocean for these majestic creatures.

Two of the most popular spots include the Torrey Pines State Natural Reserve and Ellen Browning Scripps Park. Just make sure to bring your binoculars.

Outside of the Christmas and New Year’s holidays, this is the best time to save in San Diego. Budget travelers can usually snag a deal on airfare, hotel rooms, events, and other perks when arriving during winter. Save a few extra dollars on a late check-out fee – plan some activities for your last day in town and leave your bags at a luggage storage shop in San Diego while you see the sights.

Due to its mild climate and year-round temperatures in the 60s and 70s, you can explore San Diego’s top attractions any time of year. Cool, rainy winters prevent you from experiencing the most sunshine and an influx of tourists can make summer extremely crowded.

Spring and fall are the best times of the year to visit San Diego to enjoy its beautiful weather while missing the apex of peak season. Shoulder season in San Diego escapes the rainiest months of the year and still offers plenty of cultural events and outdoor activities.

May 5, 2020Rex
8 Things You Didn't Know Would Happen When You Lost WeightWhen Should You Go To Your Child’s School About Bullying?