Home > That One Time a Driver in Ethiopia Nearly Killed Us

That One Time a Driver in Ethiopia Nearly Killed Us 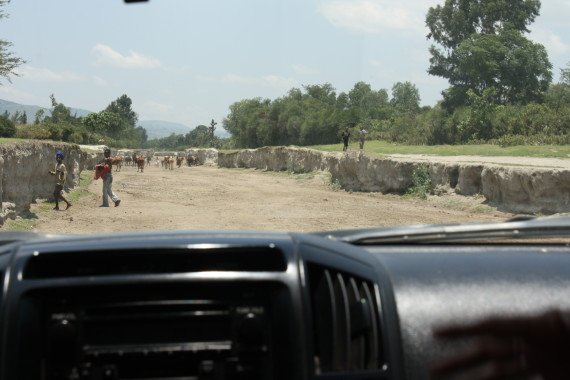 Bryan and I  left our amazing team in Ethiopia to finish up work there while we were called back to South Africa to bring filters and check out some local community projects.

The time of our drive from Awassa back to Addis we now look back and laugh about, but at the time was really stressful.

Our friend, driver, and team member, Girma, had to stay in Awassa with the rest of our group while we had another driver with whom we had really no experience.

On our first stop, our well-intentioned driver wanted to take us to a fish market, but he unfortunately was not prepared for the crowd that was going to follow. He left us standing there alone while ridiculously large birds (I’m serious, the things were as big as me) and some very enthusiastic people came running to us. This area, we found out, is a typical tourist destination for Westerners, so when people began asking for money aggressively and our driver was nowhere in sight, we did start feeling like the mood was not going to be pleasant much longer if we stuck around loitering without appeasing the crowd. We have made it a point not to give money in situations like this, especially, and so we waited it out until our driver emerged with fried fish looking quite shocked at the scene he found upon his return.

We finally made it out of there and were on our way.

This is when I noticed the speed our driver liked to go on these roads where 5MPH donkey carts  ride along with speeding cars and pedestrians will randomly be standing by (or animals). Our driver, it seemed, liked to go the speed of a bat out of hell.

I think Bryan tried to tell him to slow down with no avail. I remember we were averaging 140kph on these roads and I thought it would be best to try to take a nap, so if I died I wouldn’t know it.

My nap didn’t work out so well because, every 5 minutes, Speed Racer would slam on his brakes and at one point I heard Bryan give out a yelp and look back at me. Turns out we almost hit a child, but thankfully did not (although, we may have grazed the poor kid).

Finally, we stopped for lunch.  Our new driver-buddy tried to feed me, which is normal in Ethiopian culture to do out of friendship, but after we realized he only wanted to feed me and not Bry, we all started noticing the conspicuous inequality happening.

Then we make it on the road for a good solid hour or two (mind you, this trip was only supposed to take about 4 hours, and we were on hour 6 without really the end in sight) and our driver announces, “Now we will stop at my house.”

This was not on the agenda.

Brian leaned over to me and whispered, “Well, there is a good chance we are getting sold into white slavery.” …

Our impromptu stop, of course, was innocuous and we really were just dropping off his luggage, which he thanked us repeatedly for allowing him to do (although, we weren’t really given the option not to, and really, we probably would have said yes if we knew what was going on anyway) but before we realized this, we were very concerned the trip was taking an ugly turn.

The next couple of hours went by pretty uneventfully. I think it ended up taking us around 9 hours total to get to our destination. We told our driver we needed to be picked up at 5AM to be taken to the airport. He said he would make sure he was there and we waved goodbye and left.

Bryan turned to me and said, “What do you bet no one is here to pick us up at 5?”

I was thinking the same thing.

Of course 5AM arrived, and miraculously I was up and ready at that time, but no driver. We ended up hitching a ride with some UN pilots and made the most of our bizarre situation.