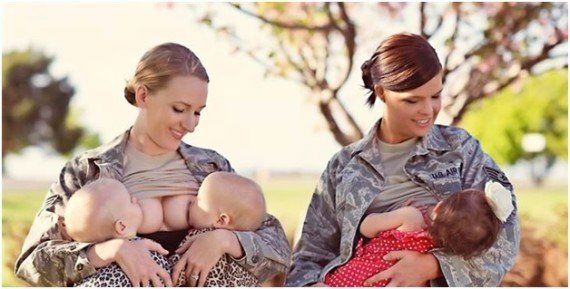 Whoever said a picture can speak a thousand words was right, even when I could speak none. A group of breastfeeding women, including myself, all took part in a photo shoot with the intentions of  letting others know breastfeeding is possible regardless of your situation. My main contribution, or so I thought, was that I happened to have twins. Boy was I wrong. Another woman and I, who both served in the Air National Guard, also took pictures in our uniform to show that even those serving could also breastfeed. We were both prior active duty so we knew the struggles of both being full-time and part-time military. Contrary to popular belief, we did get permission to take the pictures. After the pictures were taken, we were going to consult the law office on base and get permission for the photos and positive quotes to go along with them with the goal of having them put into women’s exam rooms.

After the photographer posted a preview of the pictures on Facebook, the military breastfeeding picture spread like wild fire. Our plans were never to come to fruition. Comments, and then news articles all across the world started to question whether what we did was right. How breastfeeding can ever be wrong, I have no idea! After I did a telephone interview with the Today Moms,  I received a phone call from the Air Force telling me not to do any more interviews and to stop talking about the subject all together. They even asked me to take the photos off of Facebook and to not make comments or share any stories that involved the picture. I had to comply with the no speaking order but legally I didn’t have to comply with them controlling my Facebook. There were many rumors going around about why the Air Force was so upset over the picture. They told me that they aren’t against breastfeeding at all but that it is against the rules to promote a product while in uniform (which it is).

Is breastmilk a product? How did Terran hold her own under fire from everywhere? Continue reading on page 2…