Home > Should the Washington Redskins Change Their Name?

Should the Washington Redskins Change Their Name? 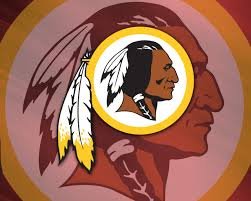 I remember the Atlanta Braves “screaming Indian” image that was retired in 1989. They were set to bring the image back this year, but ended up choosing the classic “A” after immense pressure was put on the Braves to back off of the offensive stereotypical image.

The Kansas City Chiefs changed their mascot to a Wolf in 1989.

The Golden State Warriors removed their American Indian imagery in 1971.

In 1972, the Stanford Indians were no longer.  Native American students and staff came together to present a case against the image to the Dean of Students. (Then they went and found a tree for a mascot. Fierce? Probably not, but there is not a chance in hell they will offend someone with it.)

There are dozens of other examples of teams changing their names or images after realizing the sensitive nature of stereotyping human beings…and yet the Redskins are still trucking along.

I was surprised this was even still going on, considering that the redskins are not only using stereotypical imagery, but the name of the team is considered a racial slur by many Native Americans.

A couple of events made me start thinking about this controversial issue.

A week or so ago, my dad and I were browsing antiques and I came across an old “indian” team mascot (for a college team): 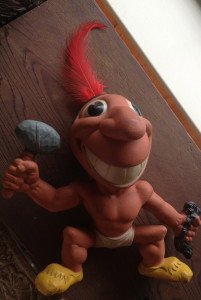 Not long after that toy mascot encounter, I found an article about Congress intervening in the Redskins controversy. I’m quite sure the author had some strong points in the article about the government intervening unnecessarily at this point, but he started the article with “They’re baaaaaaack” (referring to who he calls the “Society of the Perpetually Offended”). I’ve noticed a lot of bloggers use this as a funny/snarky way to start a post, but not only has it been overused, it sets a tone that makes me personally discredit anything written after the second a in “baaaaaaaaack”- not to mention this specific article was written for a “news” website.

The article linked to another article when citing “90 percent of American Indians say they have no problem with the name.” That was a fact I found interesting. I looked up more articles on the topic, all citing the exact same study, but never with a link to the actual study.

I found the study and found out they polled 768 people between October 2003 and September 2004. There are 2.9 million American Indians in the US, so a poll of under 1000 didn’t seem like it would reveal much truth, but it also wasn’t terrible given the number of Native Americans identified in the US. Here is the catch, though: the people polled (this would average 16 people polled per state excluding Alaska and Hawaii) are “self-identified” Native Americans. That could mean essentially anyone. For reference- my sister self-identifies as Native American. I think our great-grandfather might have married a Native American woman after our biological great-grandmother died. My sister also has an ugly dream-catcher tattooed on her hip (she’ll tell you how ugly it is too). That is pretty much as culturally involved as she gets. She could have, technically, been a part of this study.

It is also too bad that the study was not conducted in 1992 during the Superbowl in Minnesota, they could have visited one location and doubled their polling group (albeit the results would have been slightly skewed). The Redskins played the Bills, but 2000 Native Americans showed up to protest the Redskins name. They held signs saying “we are not mascots” and “promote sports not racism”.

Dan Snyder, the owner of the Redskins, claims it is their 80 year history which is making him hold on tight to the name, but he never really addresses the concerns over the name being a racial slur for many.  He just says he will not change the name.

This is beside the point, but also interesting. Dan Snyder was offended by this picture of  him with horns (trying to make him look like the devil) and accompanying article (that had nothing to do with the image). The article, I am assuming, hurt Synder’s feelings. I started reading it, but frankly, got bored a couple of letters in, so maybe it turns pretty heinous, but from where I stopped it wasn’t earth shattering defamation or anything. (This is coming from a person who has all of the above written about her.) His response (along with his management) was what seemed like a huge overreaction. They went out of their way to claim the doctored photo of Snyder was “anti-Semitic”, which I found extremely ironic considering this man owns a team that he is aware is racially offensive to many people (to the point that his non-reaction is causing the House of Representatives to react), yet refuses to admit or acknowledge this potentially is hurting a group of people. The scribble devil horns picture suddenly is an “anti-Semitic caricature” and the man who wrote the article (didn’t even draw the scribbles on Snyder’s photo) should be fired over it?

Okay, but back to the real question….it doesn’t matter what you think about the owner…What I really want to know is do you think the Redskins should change their name?

There are groups arguing why the team should keep the name, including Jordan Black, who has stated he doesn’t believe the term is a racial slur.

NFL Roger Goodell was quoted saying, “I think Dan Snyder and the organization have made it very clear that they are proud of that name and that heritage, and I think the fans are, too.” (I am trying to keep an open mind with the case for keeping the name, but I am a bit confused about what “heritage” specifically is “Redskin”?)

I was having a little bit of trouble finding articles worth sharing in favor of the Redskins keeping their name, but there was an interesting discussion on Yahoo and debate.org . Here is what some of the people wrote who voted for the Redskins to keep their name:

From Yahoo Answers (This one made me laugh.):

“Yes….and the Steelers offend steelworkers and Vikings offend Scandinavians. The Browns offend brown people. The Raiders and Buccaneers offend Pirates. The Cowboys offend cattle engineers. The 49ers offend prospectors. The Patriots offend anarchists. The Jets offend prop planes. The Bills offend everyone named Williamm [sic]. All these should change their names to like “The Recyclers” or “Tree Huggers.”‘

Smithsonian Institution senior linguist Ives Goddard spent seven months researching its history and concluded that “redskin” was first used by Native Americans in the 18th century to distinguish themselves from the white “other” encroaching on their lands and culture.

A poll of American Indians found that an overwhelming majority of them are not bothered by the name of the Washington Redskins.

Only 9 percent of those polled said the name of the NFL team is “offensive,” while 90 percent said it’s acceptable, according to the University of Pennsylvania’s National Annenberg Election Survey, released Friday.

Jun 12, 2013Jamie
13 Years Ago Today My Brother was Killed in a Blue SuicideA Weaning Story