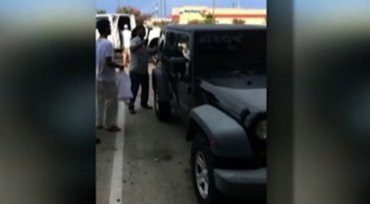 Update: The witnesses and participants during this event have reported that the mother did not intentionally lock her children in the car. The mother (who wishes to remain anonymous) told KTRK her keys dropped from her hand when she was buckling her children into their carseats. She didn’t realize her keys were on the floor until she locked and closed the door. She called her insurance company for assistance, but they told her it could take up to two hours. That is when she said she began to panic and asked bystanders for assistance.

Most of us are aware that even low to moderate outside temperatures can turn into deadly inside of a vehicle. Just last week, a video went viral of a North Carolina man who locked himself in a car to demonstrate what it is like to be left in a vehicle with drastically rising temperatures. Also, in 19 states it is illegal to leave your child in a car unattended.

That is why if is all the more frustrating to hear stories about children deliberately being left in hot cars. Luckily for this child, the story we are about to tell has a happy ending.

Shoppers in Katy, Texas were stunned to hear the cries of children in the back seat of a locked vehicle. With no caretaker to be found, they were left to decide how to handle the situation.

It was a hot day and group decided they had no time to lose. They worked together to break open the back window to rescue the children trapped inside. The mother eventually came back to her vehicle, explained that she went in to get a “quick haircut,” and pleaded with the shoppers not to call law enforcement. She admitted it was a foolish decision to leave her children, and in the end, authorities were not called.

Do you think the group did the right thing? Or should they have called the police?