The Sharjah Baby-Friendly Campaign was launched by Princess Shaikha Bodour Bint Sultan Al Qasimi in 2012, and has since been taking off throughout the city of Sharjah. The goal is to transform the emirate into a baby-friendly and mother-friendly city by empowering mothers to breastfeed (whenever her baby is hungry) with the backing of health facilities and the general community.

Initially, this campaign was focused on health-care centers, but now plans include transitioning into a second phase to reach public places such as museums, parks, restaurants, and even workplaces.

The initiative was the first of its kind in the country, and was approved by His Highness Dr. Shaikh Sultan Bin Mohammad Al Qasimi.
“Over 90 per cent of all staff in government hospitals and health centers have been trained though this campaign on how to promote breastfeeding among mothers and spread awareness,” Dr. Hessa Al Ghazal, director of the Maternal and Child Health Centre in Sharjah, and executive director of Sharjah Baby-Friendly Campaign told Gulf News.

“Modern lifestyles are evolving, so we must also evolve our methods in sync with the times. The family and the hospital are no longer the mother’s sole support circles. We appreciate that mothers of newborn babies can get extremely busy and overwhelmed – so rather than waiting for them to visit a hospital, we will be more proactive and more mobile by going to them through fellow mothers, their social networks, communities, workplaces and more. You might not be a lactation expert, but being a supportive friend is all the qualification you need to get training and advise other mothers – because moral support can be just as important as professional support.” -Dr Hessa Khalfan Al Ghazal 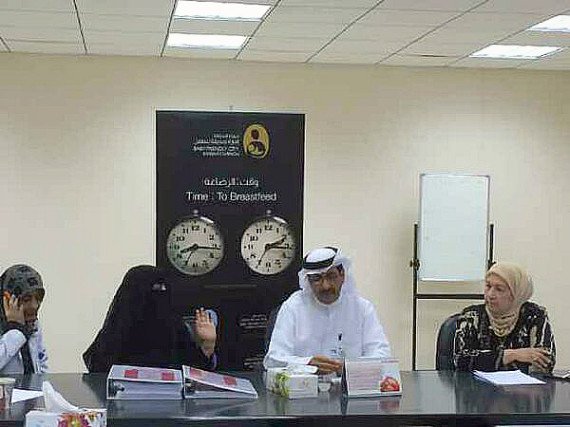 Dr. Hessa and other supporters of the campaign believe women should continue receiving support and awareness about breastfeeding before and after they deliver.

How much support does the campaign have? Quite a bit, considering even before this campaign started the United Arab Emirates signed an international agreement with WHO and UNICEF to prevent all marketing and advertising of milk substitutes and formulas in health facilities in the country.