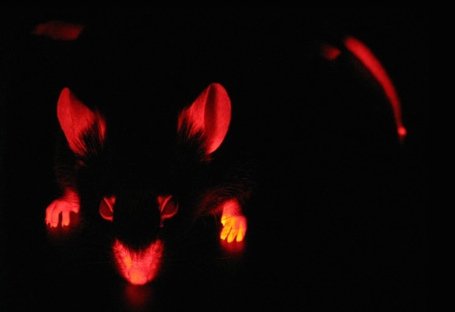 We’ve known for about seven years now that human breastmilk contains stem cells. And since then, there has been mounting evidence that this includes a particular kind of stem cell called pluripotent stem cells. This is a big deal because pluripotent stem cells can go on to be almost any kind of cell, which makes them potentially useful in treating a wider variety of conditions. But pluripotent stem cells could previously only be derived from embryos and cord blood, so the fact that they can be found in breast milk means that we now have a potential source that is more plentiful and has fewer religious objections associated with it.

The question that remained, however, was whether these stem cells are “leaked” accidentally into the breastmilk from other places in the mother’s body, or if they are specifically synthesized by the breast to serve a purpose in the baby’s body. Well, last week, an Australian research team, headed by double PhD (what the what?!!) Foteini Hassiotou, announced that they have discovered that, in fact, they probably are produced by the mother to serve a specific purpose in the baby — at least, in mice. Which suggests that it probably happens in humans, too. (A study like this is isn’t practical or ethical to perform on humans, but Hassiotou does have a primate study in the works.)

But the way Hassiotou and colleagues discovered this was almost as cool as the discovery itself. They acquired specially-bred mommy mice whose cells contain a gene that make them glow red under fluorescent lights. (This gene is appropriately named “tdTomato.”) They then gave these mommy mice regular baby mice (who didn’t have the tdTomato gene) to suckle. This way, they’d know that if any of the baby mice’s cells turned out to glow under the fluorescent light, that those cells had come from the mother’s milk, and not the baby’s own stem cells. 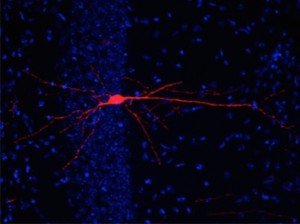 Hassiotou et al. have not yet published images from their study, so here is an image from another study that might be similar to what they saw. It is a neuron with the tdTomato gene, glowing red under a fluorescent light. Credit: Helen Bateup/Berkeley

And that’s exactly what happened. They found the cells all over the place in the baby mice. They were helping to build their immune systems, their brains, an important component of blood plasma called albumin, and they were also hanging out in the pancreas, making insulin. Stem cells from their mother’s breast milk had crossed the lining of the GI tract into the baby’s blood, taken up residence in various organ systems, and matured there as part of that system. They were literally building the baby mice’s bodies.

And since we’re talking about pluripotent stem cells, which are mostly found in developing babies, it’s as if fetal development is continuing outside the womb! Back in 1961, Anthropologist Ashley Montagu coined a term for this in reference to the apparent neurological immaturity of humans at birth: exterogestation.

When Hassiotou’s original discovery of pluripotency in breastmilk stem cells came out, Harvard breastmilk researcher Katie Hinde elaborated on her blog about why she finds this area of research interesting:

These findings were announced last week at the National Breastfeeding and Lactation Symposium in London, and will probably be published in a journal soon. You can read more about it at New Scientist. And as always, if you enjoy reading about the science of breastmilk, we highly recommend these very readable blogs by two top breastmilk researchers: Biomarkers and Milk, by Dr. E.A. Quinn and Mammals Suck…Milk! by Dr. Katie Hinde.

Nov 6, 2014Jamie
Sharing a Meal at DisneylandKeeping Your Garden Alive in Dry Spells