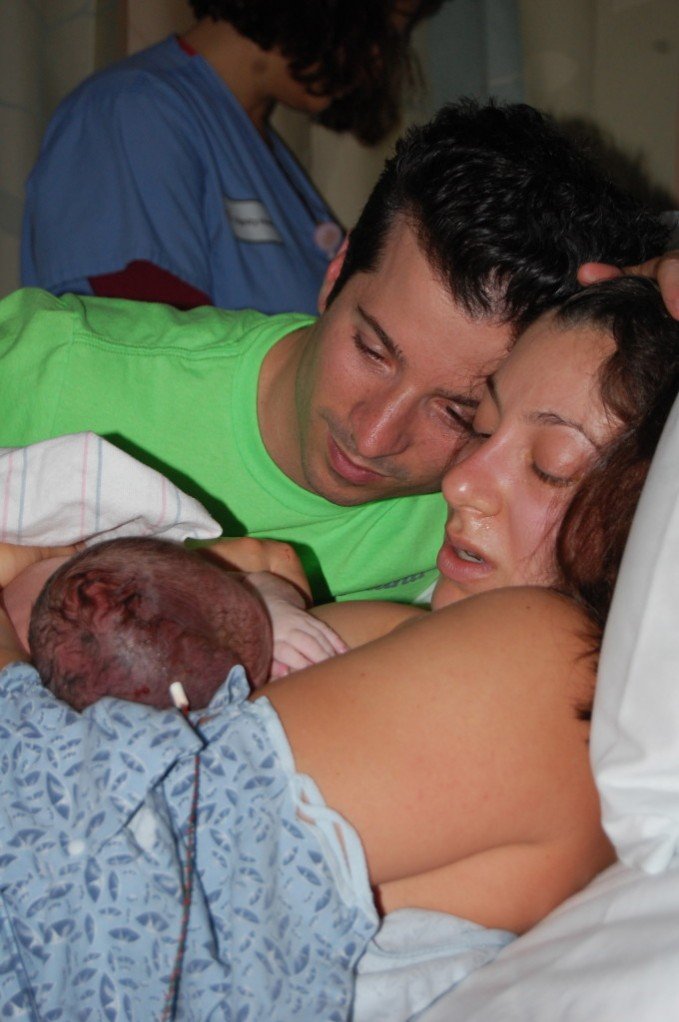 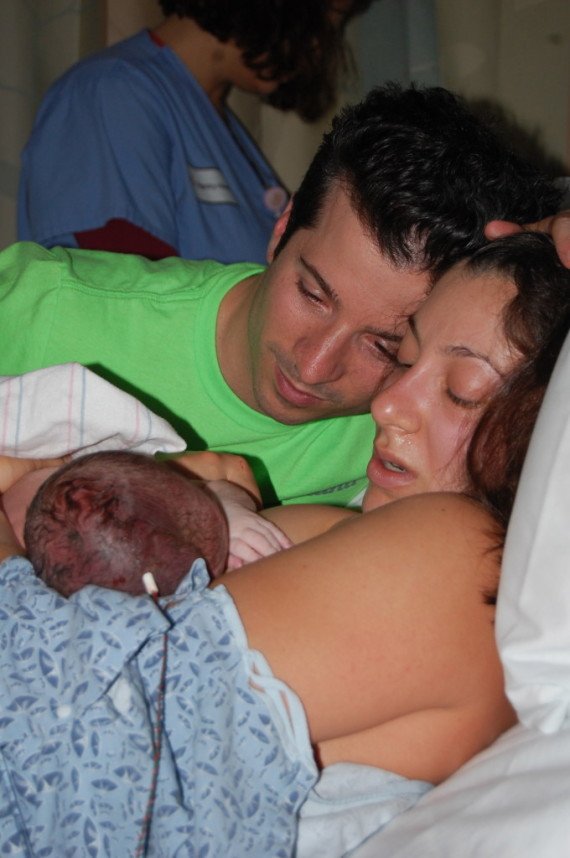 As a person who craves order and predictability, the unknowns of childbirth are hard to take. I would never have imagined the birth stories of my children would turn out the way they did: #1 came from left field and was difficult to swallow, while #2 had to be fought for with dug-in heels.

My daughter Lyla was born in November 2010 after an uneventful and easy pregnancy. I did my research and knew I wanted to have a natural birth with as little intervention as possible. The women in my family are all natural birth rockstars, and I also knew it was the best choice for the health of my baby. Alas, this scenario was not to be. Two days past my due date I became anxious about her movements. I entered the hospital for a non-stress test and stayed there; I was not in labor but Lyla’s heart rate was dropping with minor Braxton Hicks contractions. Decels continued throughout the night and morning during repeated attempts to start labor with pitocin and rupturing membranes. Finally, the dreaded C-section was advised and agreed to, as we feared for her safety. I was prepped for a C-section with epidural and other hospital junk when it became an emergency- Lyla’s heart rate fell dangerously low and stayed there for 3 minutes. I wasn’t aware of this at the time and thank goodness, or I would have been more scared than I was. The surgery went fine and I got to see her within an hour in the recovery room. She emerged in perfect condition and today she is a feisty, hilarious, and beautiful 3-year-old.

I was disappointed that her birth turned out the way it did, but grateful for a healthy daughter. We were told I was a good candidate for a VBAC, and I knew right away that’s what I wanted; I never want to be in an operating room again!
~
In February 2013 I got pregnant again, and I knew we needed to prepare more for this birth if I really wanted to achieve a vaginal birth. Not everyone is supportive of VBACs including some of my loved ones, so I had to be very firm that it was what I wanted and not back down. I became almost militant about it, researching and thinking about it constantly. I even switched doctors mid-pregnancy because I didn’t feel mine was 100% supportive and I doubted her follow-through in the delivery room.
[Sidebar- no midwives near where I live except a few that only do homebirths; what’s up with that Peninsula Bay Area??!! ←- that being said, the doctor who delivered my son was absolutely amazing!]

We didn’t do much childbirth prep the first time around and it wasn’t easy to go to classes with our daughter at home. I have a cousin who teaches Bradley Method in Virginia and she agreed to help us study remotely. Ray and I spent many hours pouring over exercises and scenarios, and it did bring up some conflict between us over my strong stance on the subject. I’d never endanger myself or my baby, but I wasn’t going to give in to changing our plans so easily or blindly follow doctors’ orders. I was bullheaded in my determination not to be manipulated out of a vaginal birth. We butted heads a bit over hiring a doula but in the end we hired my friend Lauren who was an apprentice doula at the time, and we are both very glad we did.
~
One of our greatest unknowns was whether or not my body would go into labor on its own. It didn’t the first time around and this would be key to a vaginal birth.
4 days before my due date I woke up in the middle of the night with contractions that were painful enough to keep me from falling back to sleep. I texted with Lauren over the next few hours and into the morning. She came over at midday and we walked Lyla to the park 3 blocks from our house. There I started needing to squat and breathe with each contraction. They were still varying in length and consistency a little bit but it was clear things were starting! After the park, Lauren went home and I put a movie on for Lyla and went into my room to sit on the birth ball and rest.
A very short time later I felt this strong thunck inside me that was very surprising. After a beat, I sent Ray an IM on Google Chat- ‘um I think come home’…. ‘something just moved’…. ‘or my water just broke.’
I stood up from the ball and felt the water run down my legs. 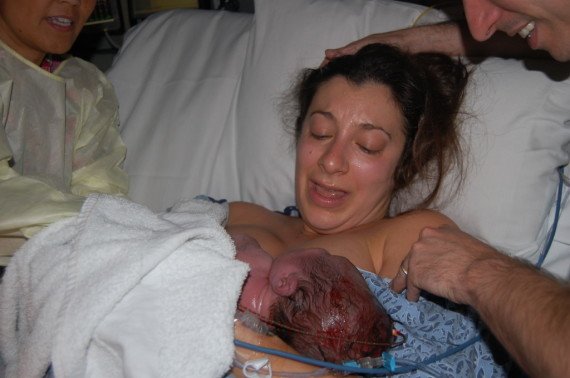 Ray phoned his parents who were coming to take care of Lyla and came home immediately; Lauren arrived again a short time after. Once Lyla was taken care of and we got to the hospital (painful ride!) we were admitted and a bunch of junk I didn’t want was administered- IV and monitors. I hated the monitors and really didn’t want them, but they were non-negotiable terms for having the VBAC. We were in a room right next to the OR too, just in case. Once the IV and monitors were attached, they did bother me less. I was disappointed to learn I was only 4 cm and 70% effaced. I had hoped with the pain I was in and my water being broken I would be farther along. I knew any length of time could make the hospital staff nervous and antsy to intervene. It didn’t help that it was about 7:30pm and I’d been awake pretty much since 1:30am. I continued to labor and quickly the pain got A LOT worse. I consider my pain threshold to be pretty high but I couldn’t handle it. Keep in mind, I hadn’t experienced ANY of this the first time, so it was like I was a first time mom.

After a particularly searing contraction I asked for an epidural. Lauren suggested we try a new position sitting in the shower, before making that decision. After an eternity of setting up the shower and transferring all the wires and monitors, we were in there about 40 minutes before I asked for the epidural again. I was just so tired from lack of sleep and the pain, I just wanted some rest. I felt like a failure, like I was throwing away everything I had worked for. Still, my goal this time around was a vaginal birth, not a natural one, so I kept some hope. Right before getting the epidural, I was 5.5 cm dilated.

It felt so awesome to get that epidural, let me tell you. I was exhausted and to get that relief was bliss. Getting the shot was easy but the medication had to be adjusted twice and I had to be put on oxygen because of low blood pressure. I turned into a lovely fat puffy marshmallow from that oxygen! An hour later my doctor came in to check me again- and I was 9cm!!!!! Whaaa?? My feelings of failure and disappointment turned to joy and confidence. I had gotten far enough in labor that the epidural had sped things up instead of slowing them down.

I started pushing at 11:00pm, and I don’t know where I would have gotten the strength for what was ahead if I hadn’t had that bit of rest. At first I couldn’t feel the contractions, but the epidural wore off quickly and boy did I feel them! My amazing OB never once mentioned the C-word. I kept asking if I was out of the woods and she would say “90% there, 95%, 96.5%.” The mood was light but once I could feel everything again, all I could do was space out and rest between each push. Finally, when a nurse removed my catheter and called the nursery, I knew we were home free!

At 12:22am, Ben was born. I will never forget the rush I felt when he came out. It seemed like it was taking forever and then his whole body emerged at once, and sunny side up! They put him right on my chest and I got to have him skin to skin immediately as I had hoped. The nurses helped to wipe him off right away, but he was there with me and I was pretty oblivious. 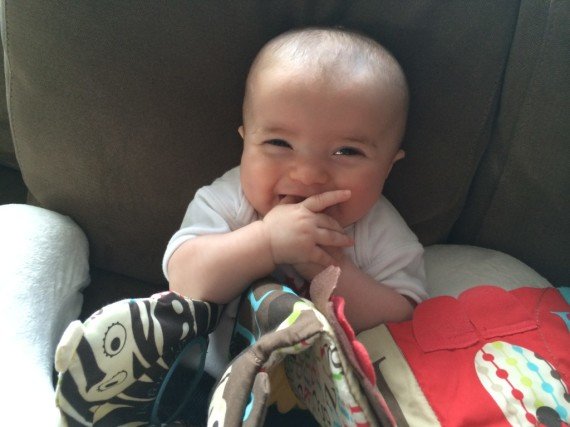 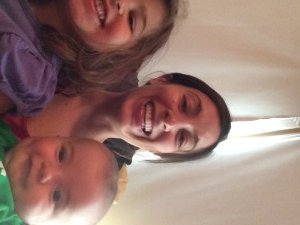 I can think of no greater high than what I felt at that moment. I had done it and I felt great. I did have a second degree tear but that was a pittance next to the c-section incision. I got up by myself to go to the bathroom within an hour and was able to get up and down to take care of Ben throughout the night and into the morning. I was amazed at how I felt, at the difference between the c-section and the VBAC. With the c-section, I was chained to the bed for days, having to nurse in weird positions to avoid the surgery sight, versus with the VBAC, being pretty normal almost immediately. This was SO important to me with my daughter at home. The adjustment of a little brother was going to be challenging enough without being handicapped on top of it!

I am extremely happy with how Ben’s birth unfolded and so grateful that I pushed for the VBAC and my body responded. I think many women decide against them too easily, because they are made to fear the risks and they just follow whatever the doctors say. Learning all that I did about c-sections and VBACs and advocating for us was a huge gift to myself and to my son. 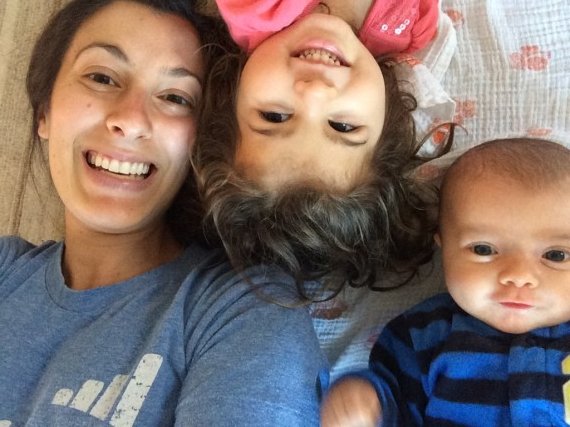