Home > Robin Williams and Koko: Gorillas laugh, and cry, too.

Robin Williams and Koko: Gorillas laugh, and cry, too. It has become clear, over the past few days, that Robin Williams had many colleagues and friends in Hollywood who loved him very dearly. But no celebrity reaction is quite as touching as Koko the gorilla’s.

Williams was a friend of the Gorilla Foundation, and in a touching tribute yesterday, Koko’s handler Dr. Penny Patterson called him “a dear friend” and “one of the world’s most powerful ambassadors for great ape conservation.”

She described how Koko, having overheard the phone calls they received about Williams’ passing, became quiet and somber. After several minutes of quiet contemplation, she signed, “CRY WOMAN.”

For me, the storybook about Koko and her kitten, “All-Ball” was my first lesson in both death and in primate social cognition. And I am glad that it was the book to do that. I learned both that it is okay to be sad, as well as that gorillas are sentient, emotional beings just like us. (I will share this and other books in a separate post about using storybooks to help children cope with loss.)

Williams had been friends with Koko since he visited her back in 2001. Dr. Patterson wrote that Koko had experienced a loss recently and hadn’t smiled in over six months–until Williams came to visit. They tickled each other and, as Williams put it at the time, “shared interspecies laughter.” (In case you were wondering, yes, nonhuman apes really are ticklish!)

“Robin seemed transformed,” Patterson writes. “…from a high-energy entertainer, into a mellow, sensitive, empathetic guy, who also happened to be really funny…Robin’s ability to just ‘hang out’ with Koko, a gorilla, and in minutes become one of her closest friends, was extraordinary and unforgettable for Koko.”

I don’t know if it’s because I come from anthropologyland and am acutely aware of how truly alike we humans are to other apes, or if it’s because I was one of hundreds of thousands of children who learned one of my earliest lessons about death from Koko the gorilla, but I think no other celebrity response touched me more than Koko’s.

For the full story and photos of Robin and Koko, visit www.koko.org. 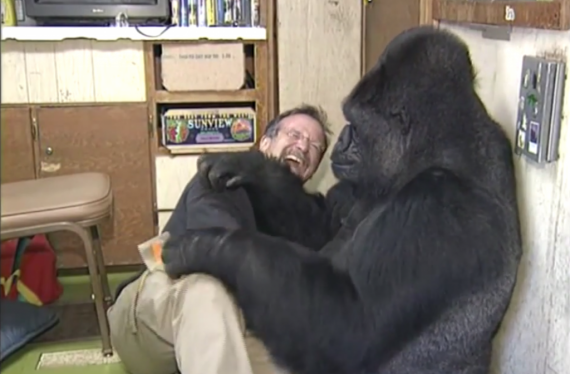 Edit 8-14-2014: Ethologist Frans de Waal recently shared comments on this story via his public Facebook page, and since I respect his work immensely I feel I should share it:

I am sorry, but I am not buying it. A good sob story, but it is not as if these two were close friends, having only briefly met 10 years ago. It is very well possible that if everyone around her is sad, Koko is sad, too – basic emotional contagion – but the specifics of this story make me think “publicity stunt” rather than plausible gorilla behavior.

It is true that the Gorilla Foundation is known for staging “celebrity encounters” with Koko in order to raise funds. (Not that I have a problem with this idea in and of itself, as long as it is done ethically, and if the money is used appropriately.) Robin served as an ambassador for the Gorilla Foundation for several years, and they may have met more times than in this one instance. It can also be seen in the video that she viewed one of Robin Williams movies prior to his visit. So she may have remembered him, but without more information we can’t be sure about what her level of familiarity with him was.

…That having been said, I personally did not interpret this story as Koko mourning Robin, but as Koko empathizing with Dr. Patterson’s reaction to the phone call–and I don’t think that Dr. de Waal would disagree that, since he acknowledges in this quote and throughout his work that apes and other intelligent mammals do appear to experience empathy and altruistic behaviors. Indeed, it is the main focus of his work.

This is a good lesson, however, on how careful we must be when interpreting the behavior of animals and especially non-human apes, who often seem so much like us. And they are. But just as we are unique from each other, they have uniqueness too–only they can’t communicate it as well as we can. Research conducted by people like Dr. de Waal is so important, in part because it helps us understand ourselves, but also because it gives us the understanding that we need to be sure we are treating them ethically.

Aug 12, 2014Jamie
Debunking myths about extended breastfeeding: "Just put it in a cup!"Is it really bad to shake breastmilk? An anthropologist uses physics to find out