Some people love wine. I definitely appreciate it, but I’ve always been more of a beer girl. That’s why I was so excited when we went to Bend, Oregon last summer.
(I’m a little devastated that I lost all my photos on my phone from that trip… alas, only Instagram images are left. )

…or maybe I should say micro-brew capital?

Anyway, this little town has a reputation for kind people, good food, and amazing beer. Many of the well-known breweries in the area started out as garage brews. That’s right, people were making beer out of their garage for hobby or a little extra cash. Now Bend’s beer culture is much, much bigger. However, they still have many micro-breweries in the area and some of the breweries have expanded to become quite large, like Deschutes which just so happens to make my favorite beer.

Brian and I went on this road trip to Oregon to visit his friend from high school who is, coincidentally in the beer merchandise business. We stopped in Weed, California first to get some beer (yes, that’s the real name, and yes, they definitely embrace it). Went to a few smaller breweries…

And then ended up at Deschutes on an awesome tour. I’ve taken brewery tours before, but this was fun because it had the same sort of passion that microbreweries do, but they had access to some pretty incredible technology.

An example of keeping the heart and soul while expanding is Deschutes Christmas brew. The brewery has a special Christmas beer that they create every year. Bend also has a huge art community, and Deschutes celebrates this by holding a contest to create the art for the label on this special edition brew.

Another thing I learned on the tour was is that hops (Humulus) and Cannabis are related and both belong to the Cannabinaceae family. (So, I guess that stop in Weed was very appropriate for this trip.)  There’s a random fact for the next time you’re at a cocktail party.

Everything that went into the beer blew my mind because it was SO much more than what I had anticipated. I was amazed by the quality control they have. All of their employees are trained for quality control; they have a tasting section that any employee can go into (I believe during their break, unless this is part of their on-duty job) and do a tasting where they fill out a card with any notes on quality that spans from the color to the taste. A couple of days ago,  1 in 100 million sent me a video of Briana Francisco, who now has the job I was so enthralled with during the tour. The campaign was created to celebrate unsung heroes in the workplace and Briana’s job is a perfect example of someone who has a job you didn’t know existed, but you end up really appreciating when you discover what they do. Briana is a is a chemist who gets to do science with beer all day. It’s heavy stuff, she does things like analyzes the ABV (alcohol by volume), Specific Gravity, Plato, pH, color, and IBUs (international bitterness units)…etc… but even she will say it’s “fun science” and at the end of the day, she’s essentially an expert on beer.

So when I’m drinking my Obsidian Stout, I will now happily think of Briana and appreciate her work ethic that is keeping my beer looking and tasting consistently great. And, just to stay on the topic of appreciating our work force, we ate at a lot of great restaurants on our trip and I was reminded of my friends who are, or have been servers.  Talk about an underappreciated job!

I’ve discovered this week you can really learn a lot about a person by the way they treat their server at a restaurant.

Many of my friends have been servers in the past and most say it was one of the hardest jobs they have ever had.

As someone who has never been a server, but does like to eat out quite a bit, I do appreciate the work it takes to keep a restaurant running smoothly and keeping all parties satisfied.

That’s why this awful Tripadvisor review of a cafe and the unexpected response by the cafe manager is so satisfying to read. It’s going viral right now because the response to the poor review really sums everything up.

Here is the original review of Bennett’s Cafe & Bistro from someone who calls herself “Hannah C”: “I ordered hot water and a slice of lemon which, firstly, did not arrive on time with all my friends’ cake and drinks. I was then charged £2 for the hot water and a thin slice of lemon,” she wrote.
“When I asked why I was being charged so much for some water the waiter rudely said, ‘well, do you know how much a lemon costs?’ Yes, it’s definitely not £2.
“He then went on to wrongly inform me that a ‘pot of tea for one’ (which is what I was charged for) is the same price as a lemon. To show just how ridiculous this is, my friend ordered a slice of chocolate cake which was £1.90.”

Well, Mike Fisher is the manager of Bennett’s Cafe & Bistro decided that Hannah’s review was ignorant and he opted to do a little educating publicly.

Here is his response:

“I’m sorry that you feel that you were “ripped off” and I’ll try to explain why you weren’t.

You entered the cafe and the waiter showed you to your seat, gave you a menu, waited for a time and then took your order. He entered it into the till, collected a cup, saucer and spoon and took them into the kitchen. There, he selected a knife, chopping board, got a lemon from the fridge, cut off a slice and put it in the cup. Then, he returned to the dining room, drew off the necessary hot water and carried the cup to your table. When you were leaving, he printed off your bill, took it to you, processed your credit card payment and cashed off the till. After you left, he cleared away your cup, saucer and spoon, took them into the kitchen, washed and dried them, along with the chopping board and knife and put away the lemon. Then, returning to the dining room he restacked the cup, saucer and spoon, wiped down your table and replaced the menu, awaiting the next customer.

That’s at least 2-3 minutes work for the waiter.

The cost of overheads for the business, i.e. rent, business rates, electricity costs, bank charges, etc works out at £27.50 per hour of trading. I pay my colleagues a decent living wage and after taking into account holiday pay, national insurance and non-productive time prior to opening and after closing, the waiter who served you costs me £12.50 per hour. Therefore, together the cost is £40 per hour or 67p per minute, meaning that the cost of providing you with 2-3 minutes of service was £1.34 – £2.00. Then the government add on VAT at 20% which takes the cost of that cup of fruit infusion to between £1.60 and £2.40 irrespective of whether you had a teabag costing one and a half pence or a slice of lemon costing five pence. I have to pay my suppliers otherwise the facilities won’t be available to other people who use them in the future. I accept that it makes the price of a cuppa in a city centre cafe look expensive compared to the one you make at home but unfortunately that’s the cruel reality of life. It’s actually the facilities that cost the money, far more so than the ingredients.

Perhaps, the rudeness that you perceived in me was triggered by the disrespect that I perceived in you by your presumption that you could use our facilities and be waited on for free.”

Bottom line- we do need to respect our workforce. They deserve to be paid fair wages and be treated with respect. And frankly, we need people to take pride in their jobs and I don’t see how they will ever do that if we aren’t appreciating their positions. 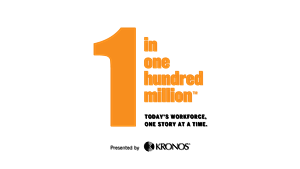 Huge thanks to 1in100million.com for highlighting America’s workforce and reminding us to acknowledge and celebrate the hidden “street sweepers” that have a quiet, but intense impact on our lives every day. To watch more of these stories (because stories about inspirational everyday people are awesome) please visit 1in100million.com and subscribe.