Home > Who Was the Real Santa Claus?

Who Was the Real Santa Claus? 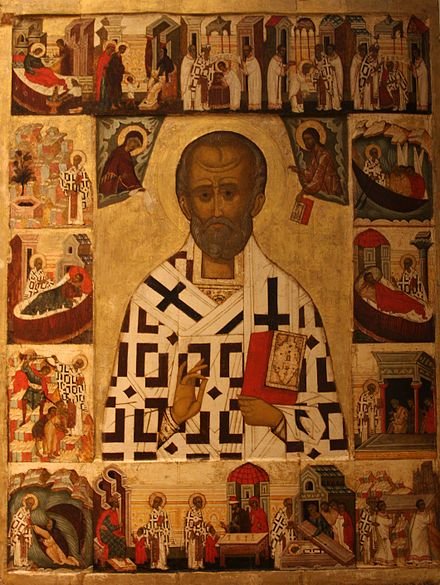 Santa Claus is an odd idea in our home. It’s even gotten weirder as we’ve opted out of exchanging presents for Christmas.

I’ll be honest. I like Santa. I also like peppermint mochas this time of year and anything that goes well with a classic Christmas song. It gets me excited.

But I also have some beef with this mythical jolly old man… Using him this year to bribe or scare my children into being “good” in exchange for toys? Not going to happen. Also, I am not comfortable with the lying aspect of this tradition.

In our home, Christmas is a time to celebrate and observe the birth of Christ (even if it was placed on this date to compliment or overshadow various pagan holidays during this time of year). For us, we have found that too much Santa has the potential to easily overshadow the real celebration.

So, Santa in our house is essentially like Frosty the Snowman. He is clearly not real; he’s a fun tradition. However, honoring the Santa tradition in some way helps us bring up the story of the real Santa Claus – Saint Nicholas.

Who was Saint Nicholas?

Saint Nicholas was most-likely Bishop of Myra (which is now modern-day Turkey) in the early to mid 300C.E.. He was known for his great compassion and kindness, always giving to those in need, and his concern for those at sea.

It was believed that Nicholas saved young women from slavery, protected sailors, spared innocents from execution, provided grain in a famine and rescued a kidnapped boy. –Source

Unfortunately, the Roman Emperor Diocletian was in power during the life of Nicholas and he was exiled and imprisoned for his faith. The imprisonment of the clergy became so intense that there soon became no room for robbers, thieves, and murderers in the prisons!

Once a new emperor was in power Nicholas was released and some scholars believe he attended and participated in the extremely important first ecumenical council, the Council of Nicaea, convened by the new Roman Emperor, Constantine I.

Nicholas was in staunch opposition with Arianism, and there was even a rumor he came to the Council of Nicaea just to punch Arius in the face! (Although, the Council records make absolutely no mention of this.)

By 900C.E. The popularity of Nicholas was snowballing. Many different stories connected to him were created.  Also during this time a Greek man wrote, “The West as well as the East acclaims and glorifies him. Wherever there are people, his name is revered and churches are built in his honor. All Christians reverence his memory and call upon his protection.”

One of the most popular stories connected to Nicholas is how he left bags of gold for a family that desperately needed it. This may have been the story which inspired the gift exchange many families participate in every year on Christmas Day.

So, the real St. Nick? Pretty much a badass…

Dec 15, 2013Jamie
"In"Black Santa and the "Founder of Christianity"