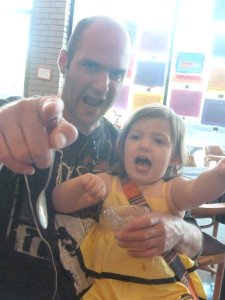 This is Chuck…he was a pretty hard core type of guy before Sloane came along. She tempered him and tests his temper, but he does so much to make her life great.

He supported me through our unplanned pregnancy, home birth, and nursing her for 3 years. He changed diapers and does everything “good” dads do (Princess balls, baby/toddler wearing, park adventures, and “getting beautified” by her), but he takes one extra step that most dads are never confronted with. He is learning ASL (American Sign Language) so that he can communicate with her. (Don’t take this lightly, he’s regularly the only dad at Deaf family events, and I’ve lost count of the number of Deaf adults that have said their father’s never bothered to learn any sign and only their mom’s ever learned to sign.) Sloane was born with a profound hearing loss, putting her solidly in the category of Deaf. He was so casual about the diagnosis, I mistook it for “not caring”, it wasn’t that he didn’t care, it just didn’t matter to him. He took it as the opportunity he always wanted to learn a new language.

I mentioned that Sloane nursed for 3 years. For the first year of her life I nursed her to sleep every night, but as she aged it became more of a marathon nursing session…he decided bed time was his domain, and he started rocking her to sleep in his arms, every night…sometimes it would be hours of him rocking and her holding his face (I never managed a picture of that because I didn’t want to distract her), until she was comfortable enough just need to be tucked in by him (NEVER me).

He has always been so supportive of doing the best for her, and giving her emotional security, even when it’s difficult or  he’s exhausted from work.

May 10, 2013Jamie
The Great GatsbyThings That Make You Scratch Your Head: Shoe Car