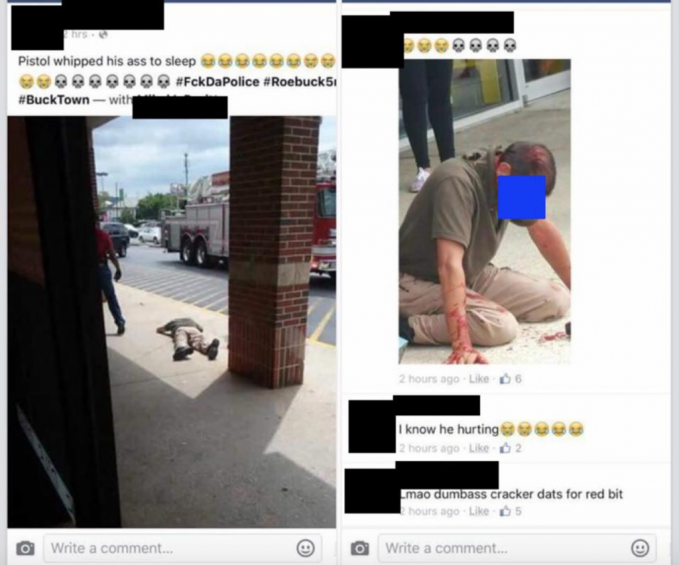 I have a rant… it probably has typos, but my thought throw up does not do well edited. Take it as is, please.

So… this popped up on my newsfeed the other day: 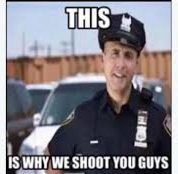 As a mother of a black son, a wife of a police officer, and the sister of a sibling who was shot and killed by the police, it makes these topics extremely personal for me, yet still distant, because I love these people but cannot relate personally to their experiences. I have the most difficulty with police related deaths because of my brother’s death. I don’t avoid reading these articles because I think that would do a disservice to my son and would be a potentially reckless move on my part as a mother. However, because it is such a trigger, this is often done in a way that is quiet, not involving social media, thoroughly explored at my own pace, and often involving my husband.

But this photo comment and the location where it was shared has me changing my tune a bit because no one is talking about this.

Several weeks ago husband had tagged me on a police page which showed a detective collapsed on the sidewalk. He was bloody from a pistol whipping by a man who he pulled over on a traffic stop. The story was gruesome and needed to be shared as suspect was still at large, but the main point of the post was to show what another Facebook user had posted about the incident: Truly Awful. It justifiably made everyone on the page angry.

The page had expressed its desire to release the name of the Facebook user, but Facebook had threatened to take down the page if it continued releasing the name of the user (presumably because he had already taken down the post).

And he wasn’t the only one. There were also Twitter users who celebrated the beating of this officer. The response from the Facebook page that my husband tagged me in was what I found equally disturbing.

Of course, not all of it was bad. Many of the comments were supportive of the detective who was injured and wished for law-abiding justice and a swift recovery.

Some questioned Facebook and whether or not the censoring of the original poster’s name was justified or fair.

But then there were the comments that were racist, angry, and violent. These were unfortunately not the minority of the posters and all were allowed to remain on the page, even though the comments section was being heavily moderated.

(Remember, this is a page created for Law Enforcement (LE or LEO) and many of the followers are fellow police officers and family of LE.) 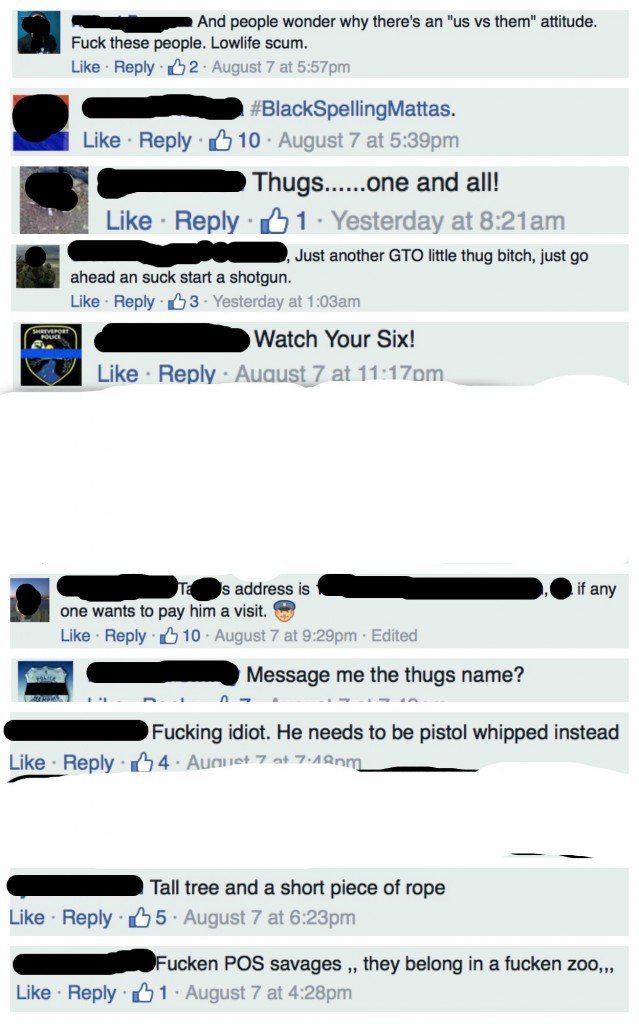 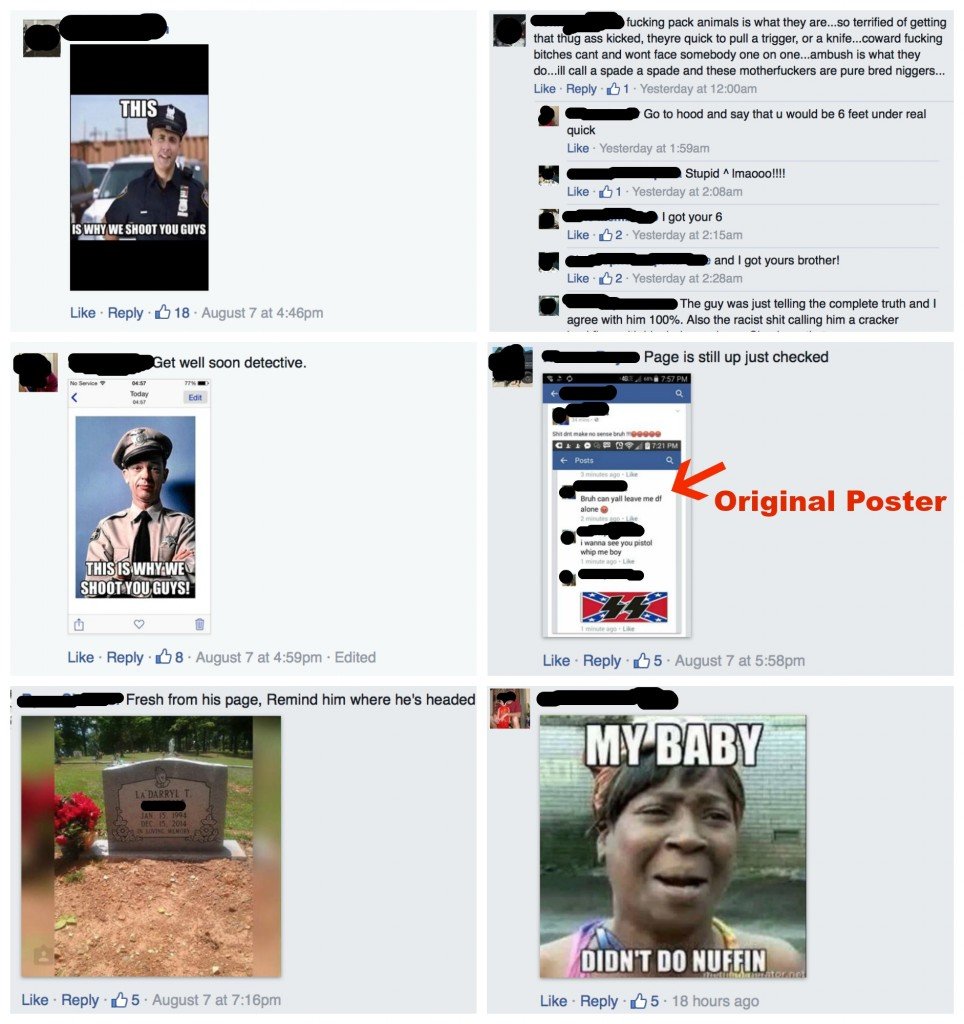 I was livid when I read this. Since this is a page that supports law enforcement and upholding the law, you can expect to (and should) face more scrutiny than the basic Joe Schmo on the streets.

I wanted to ask these posters if they honestly believed that they were aiding in the solution. They most-likely saw the other pictures from the original poster which by themselves were enough probable cause for a visit from his local police. Why wouldn’t they just let them handle it legally? The people who follow this page have been placed in a position of power, or they are representing an individual or group which supports this position, and because of this they should hold themselves up to a higher standard. It isn’t the “one-percenters” wanting to take out all cops, but it is comments like these from people claiming to support the law which are perpetuating the problem, causing more chaos, and making both my husband and son more vulnerable in this society.

Here is another example…

My husband and I sat there and discussed this comment for awhile. The back-and-forth has always been helpful, as he gives a new perspective to the topic.

The obvious issue here is that, not even taking into account the implications of the historical construction of race and its relation to systemic racism, it breaks down to the reality that people are not humanizing one another. The lack of empathy for one another is a huge driving force behind the current problem.

My knee-jerk reaction to this prison guard was to wish harm on such a hateful human being. My husband countered with an idea to think of how this man probably justified such a hateful stance. It’s not that I didn’t agree with his theories, but I had my own issues with these problems.

(Note: This article would become much longer than it already it is if I looked at the multiple reasons that there is such a high degree of disproportionality in incarceration rates for African Americans compared to Caucasians. So, I’m just going to touch on a fact that the prison industrial complex can be traced back to the Civil War. )

From there we broke it down to a more personal level. We have two sons who are two different races. How they are viewed in our care will be completely different than how they will be viewed living apart from us as adult men. It was when we brought this up while discussing this particular topic that my husband got extremely uncomfortable.

White privilege is not racism, but it sure does not make it any more pleasant of a reality.

The unsettling truth is that systemic racism is deeply rooted and while white people can say things like “Well, I didn’t cause it! My relatives didn’t even come to this country until X years ago!” Sure, but the problem is that you’re still benefitting from those white early settlers of this country. I mean, they really set out this white people red carpet that has lasted for centuries. Is it your fault? No, of course not. It’s a bit like being the recipient of blood money you didn’t want, but it still gets anonymously donated into your bank account every month. You can pretend it doesn’t exist or you can do something about it.

And as we look at the big picture regarding racial tensions, specifically involving the police, this is what I see: systemic racism, public ignorance of police tactics and training (much of this is due to police liaisons and their negligence regarding educating the public about these tactics and reasoning behind each), and public ignorance of the law. All of this creates fear driven responses from virtually everyone ( the police, the politicians, the media, and the civil rights advocates). But what bothers me the most is how little is being done to educate the public on policy, tactics, and the law. Well-rounded knowledge on the topic is a necessity which is being neglected by both the police and the reform advocates.

Providing the public with the tools to actually fight the internal deeply rooted racism that plagues our law enforcement is, and should be, the goal. Are some of these tactics that seem extreme understandable once you understand the logic behind this training? Absolutely. Is some of the training reckless and has the potential for the abuse of power? YES. But to clear up the white noise, we as human rights advocates need to be adequately educated on the subject in order to promote change.