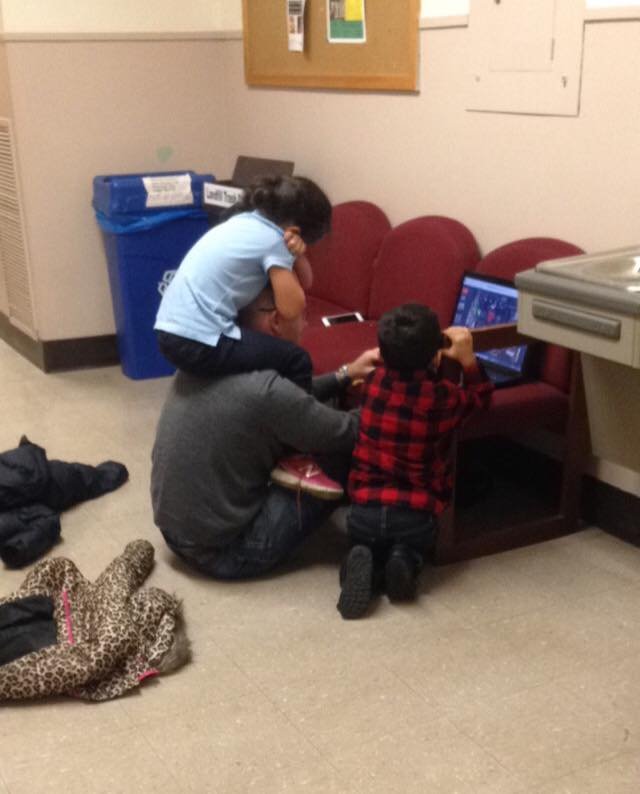 Monica is an Army Reserve Officers’ Training Corps (ROTC) student at the University of Louisville. She’s also a single mother to Marcus and Mikayla. Monica had a babysitter lined up for her 2 children, so she could take her Military History final. When the babysitter canceled last minute, her friend Victoria Henry encouraged her to bring her kids and let them play with their tablet, in the hall, during the exam. She underestimated the caring nature of their professor, Dr. Daniel Krebs.

After just a few minutes of the kids playing loudly, the professor went to the hall and simply started to play with them to keep them occupied while their mom took the final.

It seems Marcus grew bored very quickly and started banging on the classroom door. That’s when Dr. Krebs went out to play with them so Monica could finish her exam.

When Victoria completed her own exam she snapped a picture of Dr. Krebs playing computer games with the kids. She shared it on Facebook with the description stating that it was “one of the most caring gestures of my college career tonight.”

After a few minutes, the kids started playing loudly in the hall, according to the Facebook post. Dr. Krebs told ABC News it was no big deal.

A person like Monica, she’s a non-commissioned officer going to school, she’s a mom of two kids. I mean that’s the kind of thing that’s really impressive. Me handling her kids for 40, 45 minutes, that’s not impressive.

We’ve seen other professors make similar moves this year. In Israel, a similar situation happened when child care fell through. And a single mom in Nashville had help from her professor, as well. This is a trend I can definitely get behind.

Dec 14, 2015Jamie
The Importance of Knowing When to Speak and When to Remain SilentBettering Your Quality of Life