When I became pregnant, my husband and I took several classes on birth, parenting, and even a breastfeeding class. I learned a lot but was still not comfortable with nursing in public, but I knew I wanted to nurse my child. After my daughter was born I informed the hospital of my decision and the nurse helped me. I met with a lactation consultant who helped get things started and everything was going well. 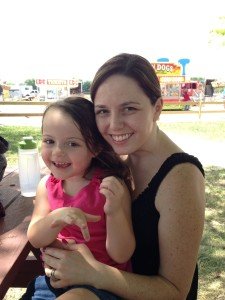 Our first night at home my daughter wouldn’t nurse. I freaked out thinking I was a failure because we had to give her formula. The next day we went to the hospital to meet the lactation consultant again. My daughter’s jaundice was making her tired so she would fall asleep nursing and not get enough milk.

As we were leaving the hospital the chest pains I was having got worse. After a call to the doctor I went to the ER where I was later admitted to the ICU with extremely high blood pressure. I had to stay overnight which caused me lots of emotional stress, being away from my baby and having to give her formula again.

I had to have a ct scan so with the iodine for the test (plus additional medicine because I was allergic to the iodine) I had to pump and dump for 24 hours. In order to help my milk come in I had to wake roughly every 3 hours to pump for a half hour. I was afraid my baby wouldn’t nurse after having so many bottles (and a pacifier), but she did. I was exhausted from waking up to nurse so often. With her jaundice she just wanted to sleep so I set an alarm for every 3 hours (and one 4 hour stretch) to wake her up, which was its own challenge, and nurse her.  I had family members telling me that she should be able to go longer stretches without eating. I informed them that this is not the case with breastfed babies as it is with formula fed babies.

I found a parenting group that really helped me feel like what I was doing was normal. I still was hesitant to nurse in public, but I  think it is wonderful when others do and I think will sometimes inform me that milk will help her feel better. I love being able to comfort her!! I can’t believe the turn around that has happened since having my own child.

Oct 9, 2013Jamie
Sugar: Filmanthropy to Aid in Fighting Homelessness in AmericaWT? Facts: What Your Vagina and Beer Have in Common