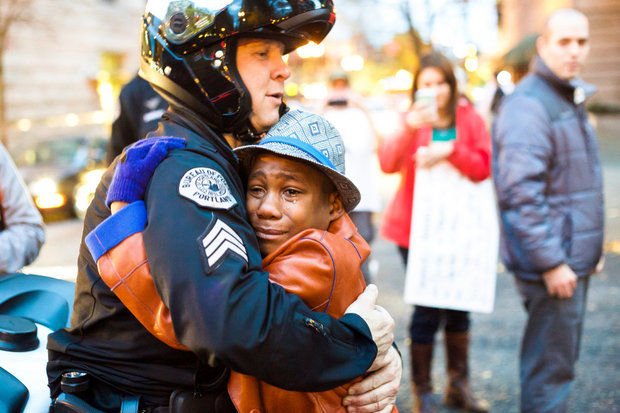 During a Ferguson demonstration in Portland Oregon on November 25, 2014, photographer Johnny Nguyen caught a powerful moment that is inspiring the nation.

At the start of the rally, emotions were high as many people did not know what to expect from policer or protestors. This is when Sgt. Barnum of the Portland Police Department motioned 12-year-old Devonte Hart over and began a conversation. Devonte, who was holding a “Free Hugs” sign, began talking to Sgt. Barnum about everything from the demonstration to art, and everyday life.

When the conversation came to a close Sgt. Barnum pointed to his sign and asked, “Do I get one of those, too?” This is when Nguyen captured Devonte tearing up and embracing the 21-year-veteran of the police force.

Many who have seen this image have sought out Devonte’s story, which is even more incredible than the viral image.

Devonte was born drug addicted and was abused and neglected from that moment until he turned 4. At this age he only knew a few words (mostly profanities), he had violent tendencies, and was diagnosed with a host of disabilities.

When Jen Hart and her wife Sarah adopted Devonte he came across as so broken the couple were unsure that they would be able to handle raising the little boy along with their five other adopted children.

However, Jen felt connected to Devonte, and it wasn’t long before the boy labeled as “troubled” began to flourish.

In an interview with New Zealand online publication The Paper Trail, Jen Hart told Chloe Johnson that with love, nurturing, patience and acceptance, Devonte has defied every negative label that was attached to him so far in his life:

“He inspires me every single day. He has proven doctors, psychologists and teachers wrong. His future is most definitely not bleak, he is a shining star in this world. His light shines bright on everyone on his path.

“People always tell us how lucky he is that we adopted him. I tell you, we most certainly are the lucky ones. Yes indeed he is living proof that our past does not dictate our future.”

The child who balks at the questions of “what do you want to be when you grow up” and challenges your perception of abilities and appearances, is clearly here to inspire…and he’s not waiting until he “grows up” to do it.