Home > Ouch You Bent My Wiener: One Man Speaks out about Male Body Image…Kind of 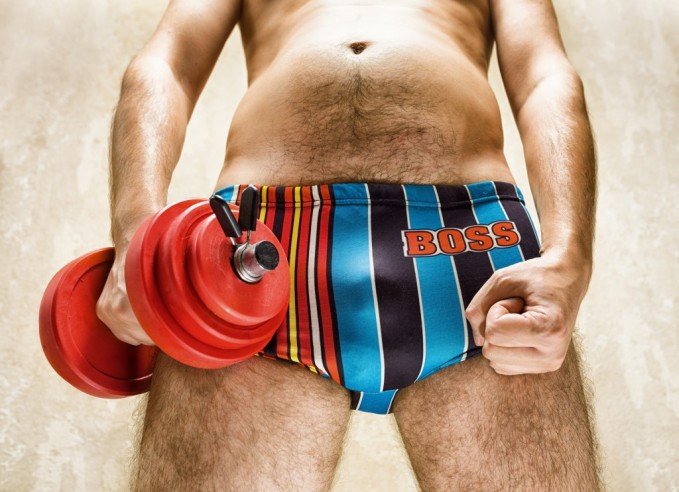 Now that we are in our second pregnancy I realize that I missed a HUGE part of the discussion. I should have pointed out how bizarre the male body is ALL. OF. THE. DAMN. TIME.

So here are 4 funny ways that men see their bodies:

Really God? Why is there a seam in it? It truly shows that we were Version One of the human template. The thing looks like a bleached walnut when we’re cold and a poorly matched pair of mandarin oranges in a wet sock when we’re hot.
I’m tempted to tattoo a line on my leg each year to mark the descent of my testicles. I think that a tattoo would be more appropriate than marking the wall next to the measure of our children’s height. 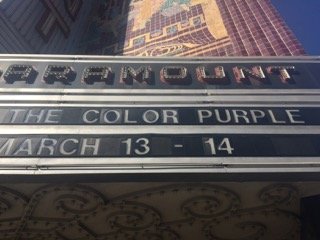 One day I will plop my happy ass on the toilet and my testicles will dip into the water. It will be sad and invigorating but I will have to rethink my toilet time genital positioning. I assume that I will have to lay them gently over my leg like a waiter donning a towel across his arm before presenting a bottle of wine… but we’ll cross that bridge when we come to it.

Call me strange but I try to imagine my penis from my 16 month old daughter’s point of view. She points at it and furrows her brow with concern. It’s obvious to her that I am horribly injured because pieces of my body are outside and swaying like a fleshy slinky. 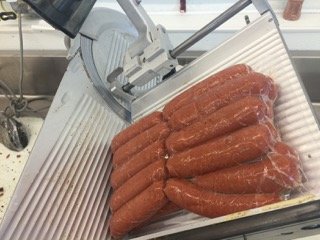 In my opinion a penis would only fit as the foliage on an alien planet in Star Trek. I imagine Captain Kirk and a rescue team being beamed down to a planet filled with massive and veiny penis trees. The ground of the planet, let’s call it Penicia 4, is mushy and purple and the air is dank. The crew lands and automatically knows that the planet is hostile and that the air is not breathable. Most of the crew will die a horrible death and only Kirk and Spock will be beamed up in the nick of time… because that’s the way these things work.

About 2 years ago when I was at my heaviest, a Twinkie-laden 217 lbs., my best friend, Leona, pointed out how far apart my nipples were. I looked down past my ruddy Santa cheeks and chins to notice that she was horrifyingly correct. The little pink bastards looked like they were running for the shelter of my armpits undoubtedly from some Cheeto hailstorm. My obsession with my traveling nipples became increasingly unhealthy. I came up with a strange scenario in which a man’s nipples slowly circled his body until they connected in the middle of his back. At the moment of nipple joining the man reached his allotment of time and died.
It’s possible that I have too much time on my hands but it’s also extremely likely that our god is unfair and leaves us with bizarre and unanswerable questions such as these.

Last year, without saying anything, my barber used the clippers on my ears. I’d been tweezing some strays and acting as though they were just some random occurrences. Just like my weight I’d been in denial. Men are awesome at denial… it’s kinda our thing.
“I shrank these jeans. Damn these stupid dumbass jeans.”
“I always get more stray hairs in the winter.”
“My nipples have always been 3 feet apart.”
The truth is that I was a lumpy fat mess and my nipples were running away from my cholesterol filled heart. Damn it. My nipples were ashamed of me. 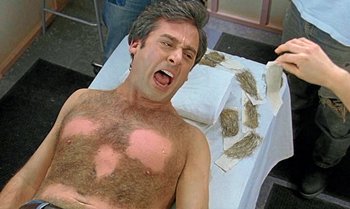 Ugh, so now there’s enough hair growing out of my ears to add to the routine maintenance that I no longer have time for. Considering that I have children I have the choice of taking the time to groom myself or defecate. Many days I am unable to accomplish either of these tasks.
Zits grow unchecked in the crevice between my ear and my jaw, orange wax builds within the ear and then, of course, the dark brown hairs grow on top of it and DAMN IT that’s just MY EAR! I don’t even bother to lean over and check my back anymore. I already know that’s jacked. I’ve given up.

I’d like to conclude with a quick story I think that we’ve all experienced.

A few years ago my wife and I had a… ummm… positioning problem.
“Ow! You bent my wiener!” I screeched as the pop came from a place that I knew had no bones and no damn good reason for making popping sounds.
I remember how my wife immediately started laughing. As we laughed about the hilarity of a ruined moment I felt closer to my wife than ever because I’d been allowed to be human. That moment allowed me to laugh at the exterior of what I am and connect more with who my partner and I really are inside.

At the root of it all, we’re all bizarre and mushy creatures that live in a strange and scary world. Women know that they’re probably going to push a baby out of their body at some point in their lives and men know that the hair on their head is going to fall out and become hair every damn where else. We’ll all get old and our parts will slowly stop working and then we’ll die.
Often we need permission to be involved in our own humanity. We need to be able to laugh at each other and ourselves in a loving way…
After all, it’s often the mundane times like when a wiener gets bent that tends to allow us to be us, to laugh and love a little easier and to accept what we all have to give.
Can you relate? 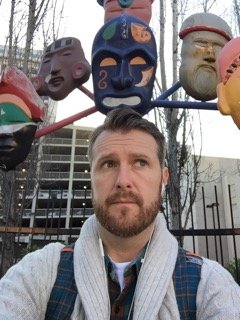 Ryan Anderson Bell is an author, speaker and podcaster. As a native Georgian living in Berkeley he recognizes how strange life is in his comedy and writing. Equal parts Mr. Rogers and Howard Stern, Ryan speaks openly and honestly about his successes and failures as a parent, a partner and… human. Follow him on Twitter @Ryan_A_Bell and his blog at www.daddyissues123.com.

Mar 3, 2015Jamie
Why Pregnant Women Should Consider Sharing A "Due Month" like Kate MiddletonMy Most Embarrassing Moment (This Is Why They Won't Let Me Go to the Drugstore Alone)