As it turns out, nonhuman apes, as well as other mammals, very much do appear to be ticklish. 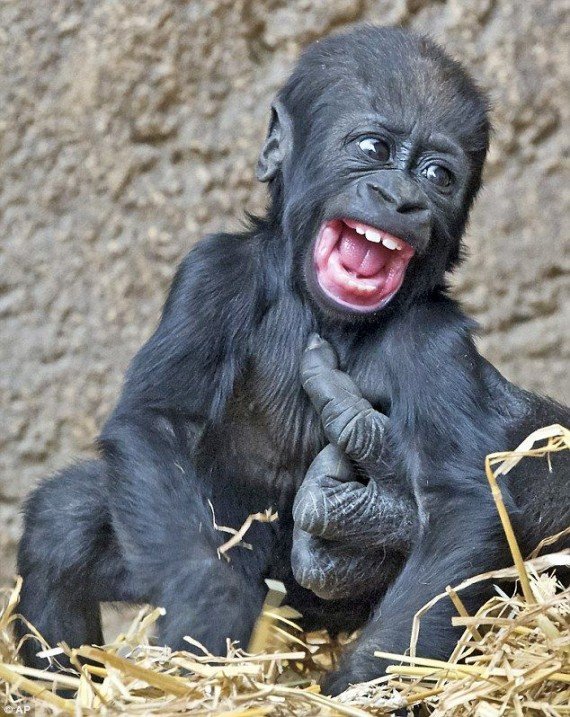 The brilliant ethologist Frans de Waal, who researchers empathetic behavior in mammals, describes the above photo:

Five-month-old Jengo was showered with affection by other gorillas in his enclosure at Leipzig Zoo in Germany when one of them reached out and prodded him on the ribs. The facial expression is officially known as the “playface” and often goes together with hoarse panting sounds, homologous to human laughter.

Hypotheses about the adaptedness of tickling range from promoting social bonding to refining reflexes in preparation for learning how to protect one’s vital organs in a fight. Want to know more about the evolutionary origins of laughter? Check out this 2009 article from National Geographic. 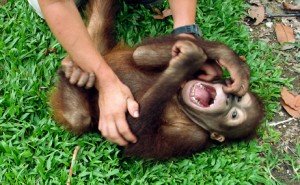 No matter what the species is, it’s invariably super cute! But parents might be well-advised to use tickling as an opportunity to teach their children to take ownership of their bodies by giving them a chance to consent or say no before tickling begins, and giving them opportunities to catch their breath or stop the interaction completely if they so wish. Laughing is a reflexive reaction to being tickled, and doesn’t necessarily mean they’re enjoying it. (End public service announcement!)

Photo credits, in order of appearance:
Gorilla — AP
Chimpanzee — Infant Chimpanzee and Human Child, by Nadezhda Ladygina-Kohts (…which looks like an absolutely fascinating read, by the way. I was unsurprised to find that the English version is edited by the above mentioned Frans de Waal.)
Orangutan — National Geographic