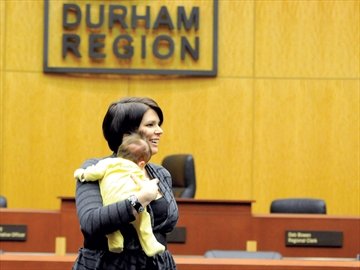 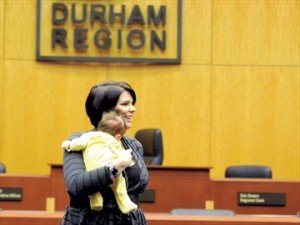 Oshawa City Councillor, Amy England, gave birth to a baby girl Dec. 13 and has been showing her support for working breastfeeding mothers. This is why she will be taking her daughter to council meetings the first few months of her life. 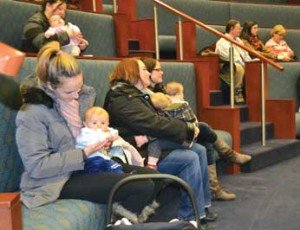 Breastfeeding support activists showed up to silently cheer Amy on. A little over a dozen mothers showed up for the Jan. 22 council meeting with their infants, after they heard Councillor England has been receiving criticism from the public for the choice to bring her daughter to the meetings.

Councillor England says she is planning on taking her daughter to the meetings until March, when she believes her milk supply with be significantly established.

Councillor England told durhamregion.com, “Only 25 per cent of politicians at the municipal level are women … I’m hoping this can inspire more young women to get involved.”  She added her council colleagues have been “super supportive” and went on to say her daughter has typically been quiet during meetings, but she has another support person (normally her husband) in the meetings with her who will tend to the baby if she happens to get fussy.

Here in the US, many men and women are now speaking out for mandated paid parental leave in the United States, suggesting that supporting new parents in this way will reap long-term benefits for the country.