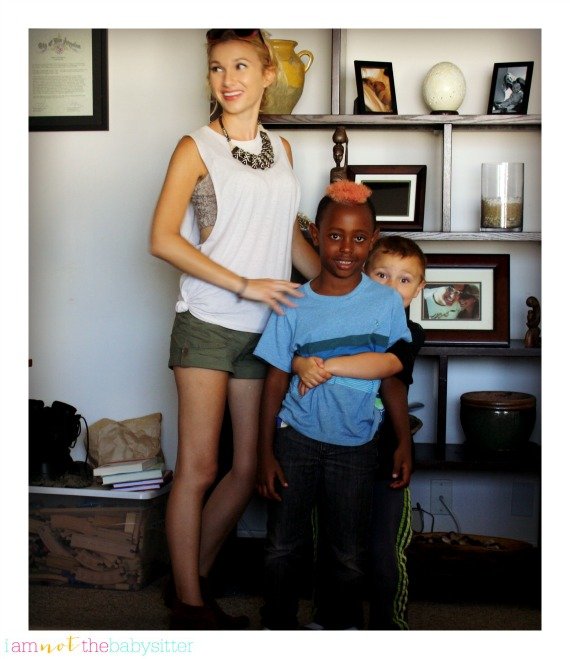 Yesterday was an interesting day.

I called and called around looking for push-up pop molds. Finally, a Sur La Table employee flippantly responded that they indeed carried the product.

After a 30 minute drive to the store, paid parking, and two little boys ready for breakfast in tow, we arrived. The man I approached at Sur La Table was extremely apologetic, but explained they did not carry the stupid push-pop molds. (I would like the know if the other employee I spoke to on the phone would like to pay for my gas and $10 parking for that pointless excursion?)

We went back to the parking garage, where I told Samuel not to jump on the stairs because there was urine all over the stairwell area from whatever human being had decided that was going to be his or her toilet for the day. Upon my suggestion, Samuel made one last grand jump and fell directly in urine.

This set the tone for the day.

Flash forward to the afternoon and we took both boys to their mixed martial arts class. The class is currently undergoing some major changes, including a change in instructors, so, as this transition happens, it is a bit more like Lord of the Flies than a disciplined class, especially afterward when the kids decide to all pounce on each other and the assistant/volunteer child-coaches. It is a good way for the kids to gain a trust and relationship with the new coaches, but it can get out of hand.

One of the children got hurt in the chaos and went to his dad for comfort. I heard him trying to soothe his son by saying the child who did this to him was “bad”. “That is a bad kid.” “Everyone is rough-housing and some kids are taking advantage of the situation.” (These are 2-5 year olds.) I can’t remember exactly the other words he used, but I think he may have described the child as a punk, and he just went overboard to tell his child how “bad” the other kid was. Then, he pointed at the kid. I was uncomfortable sitting next to the man while he berated another child to his own child, but then I looked over and saw he was pointing at Aram.

Then, it became my business.

“Excuse me that’s MY son.” I felt that awful hot feeling of anger swell up inside of me. The man looked a bit surprised. “No, no that’s not your son. I know who your son is, he is a good kid.” (As opposed to the other kid who was “bad”.) I still thought he was confused and was speaking about one of the boys, but soon realized that he was referring to another child in the tornado of bodies wreaking havoc on the mat. Then, I was hit with mixed emotions. The man, who actually seemed like a nice guy in a normal setting, was trying to extend an olive branch by telling me my kid was “good”. I was mistaken, so I felt a bit of embarrassment (kind of like the time our pastor stopped Christmas Eve service to chastise the person loudly laughing in the front row during an inappropriate and serious time in the sermon…only to find out the person in the front row was developmentally disabled….), but I also realized that my anger wasn’t going away. Not only could he have very well been talking about the majority of children out there, but that child has a family and is a valued human being.

I got mad all over again at the lack of respect for a child. So, since I was already in it I kept going.

“You know, they are just rough-housing out there; all of the kids are doing it. That kid isn’t worse than anyone else.” Then he offered me this piece of advice, “You need to stay out of it.”

Fair enough, it isn’t my business to parent his child, but if someone is speaking about “bad” children loud enough for the parents of any of the children in the surrounding area to hear, there is a good chance you may get an earful. It didn’t stop with me, the woman sitting next to me didn’t like the way he responded so she called him a male chauvinist. He responded by saying she was uneducated and left. (The woman he was referring to has a doctorate.)

I understand the man wanted to soothe his child, and validating his son’s feelings of being hurt is great, but doing that at the expense of another child and others’ feelings doesn’t seem like the healthiest way to go about it. So, I am a bit torn about continuing on after I found out I didn’t actually have a personal connection to this conversation with his son. Nevertheless, feelings of others were still on the line, so I’m not totally regretful that I said something in the defense of the other child. What do you think? How should we explain undesired behavior of other children to our children? Also, when is it (or is it ever) our place to speak out against parents who are being unkind to others?