My husband got notification of his deployment when our son was 10 months old and he was gone for training about a month later. He got back home about a year later – when our son was nearly two. We thought it would be a great time (as far as timing a deployment goes) because our son would be young and probably wouldn’t remember him being gone…but it was harder than we expected it to be.

The soldiers all had about two months of train-up in Washington, and then got a 4-day pass before they would leave for Iraq. The hardest part was when Terrence left home after that 4-day pass. As a military family, we’d been apart for 4-8 weeks many, many times (in fact, he was gone during my 8th month of pregnancy). This time, however, it was going to be at least six months before he got leave again. This time, he was going to be out of the country. This time, he would return changed, I would be changed, and Harrison wouldn’t be a baby any more. When I drove him to the airport, we both bawled. 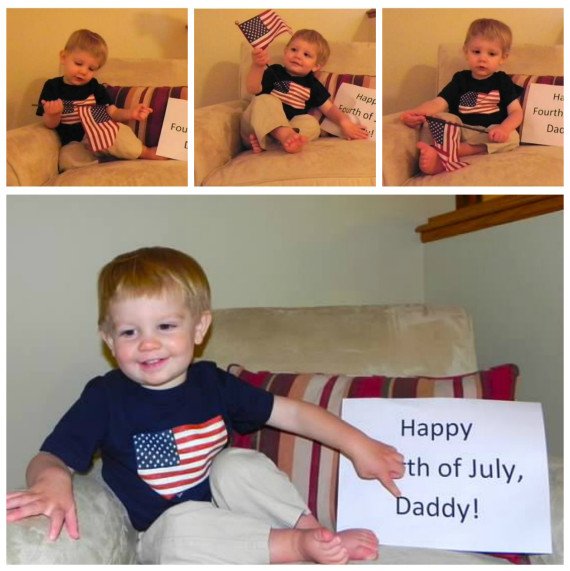 a few pictures we sent in a care package to Daddy

I can’t remember the exact timing of it, but it was the next day or the day after that our son and I left to go to Hilton Head with my parents. I’d be traveling during part of the time that Terrence was traveling to Iraq via Kuwait, which kept my mind off of it. I wouldn’t know when he got there anyway – we weren’t really sure what the access to communication would be, so we planned on it being up to a week or two before we spoke. One morning, my parents and I got up early and went to one of our favorite breakfast restaurants. My phone rang while we were there. It was a number I didn’t recognize, but I answered it anyway. When I said, “Hello?” there was a long delay. Just as I was about to hang up, thinking it had been a wrong number, I heard Terrence’s voice, “Hey! It’s me. We’re here!” My heart soared to hear his voice. That conversation was short – I think each soldier was limited to about five minutes, and the delays between our responses to each other made the time go faster, but it was the first contact we’d had after our difficult goodbye, and it meant more than I could describe.

Terrence’s phone call was courtesy of the USO. At each base overseas, the USO has computer and phone stations so that soldiers can have contact with their families back home. This is just part of what the USO does in pursuit of their mission to create moments and memories for military families. When Terrence came home for leave six months later, the USO got him a hot shower in the Atlanta airport – allowing him to literally wash off the sand and grit of Iraq for a refreshing break back home.

It is the USO who helps families of the fallen get to Dover, Delaware. This is where the body of their loved one will first touch American soil. USO employees are working 24 hours a day to ensure that families begin their trip to Dover within hours after receiving the news. That way, the family can be there to meet the plane carrying their soldier. The USO:

The USO also supports military families in the happiest moments of their life. This morning, the USO got Coast Guardsman of the Year Sam Peikert to Good Morning America to propose to his girlfriend. This surprise reunion on Saturday was also courtesy of the USO:

I love his face at the end when he sees how pregnant his sister is!

The USO provides so much support for military families, and this Veteran’s Day we think they are the perfect recipient of donations from the $5 challenge.