Well, it happened. Brian had his first interview. 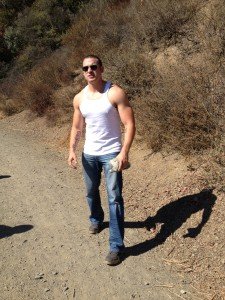 An attachment parent or a badass? I am going with both.

We received an email a few weeks ago for an interview request. What made us excited was it wasn’t for me, it was for Brian! They wanted to get his views on AP. This is the first time anyone has ever asked to talk to him about it.

“It’s about damn time!” Brian said. I agreed. We were excited and said yes before we had time to really let it sink in. Here is the thing: Brian has a fear of interviews or speaking in public. Oddly enough, his job requires him to be really hands on with strangers every day, but when it comes to giving a specific set of responses and trying to get a message across- he freezes up. He’d never been asked for an interview like this before, but job interviews- ugh, those were stressful times in our house. He was so excited someone finally wanted to talk to him, a dad, about this subject, that he sucked it up and didn’t even mention his fear of interviews.

The day finally came and the interviewer came over to our apartment to interview Brian. It was very casual and I was invited to be there with him during his interview. Well, that was all of our first mistake. Brian is always the strong one of the two of us in the relationship, physically and emotionally- he is tough. Seeing him vulnerable made me get really protective over him. I saw the fear in his eyes, wanting to say the right thing and please the woman interviewing us (she was lovely)- he had the look I had during my Today Show interview- complete shellshock.

I did what I do best- talk…a lot. I was jumping into the conversation. I was used to answering a lot of these questions, but also Brian and I take to parenting differently and I think that is why I am more ready to jump in to answer questions. Brian is more “let’s do what feels right” kind of parenting. I’m more “let’s see what the science is behind why this feels right” kind of parenting. Complimentary to each other, but totally different. So, while Brian may not have detailed answers other than “It works for us and it is natural and easy for our family” I would want to jump into a monologue about why it works so well, which embarrassingly, I think I did. 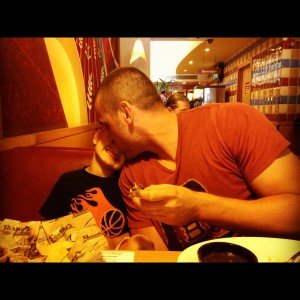 I was sitting there attempting to bite my tongue while Brian was working through the interview. I felt like that annoying know-it-all kid in class that would wave their hand at the teacher while she asks another student to answer the question. Luckily, Brian wasn’t distracted by my well-intentioned hijack of his interview. He got much more comfortable as he progressed, which led to answers that were much more thoughtful and allowed his message to come through.

So, hopefully I didn’t ruin the interview and his bit will be used for the article because he really does have an important message that deserves to be heard. We are also excited about the article because they are interviewing multiple AP dads, which is brilliant. We can’t wait to read it…Although, I hope they leave out any of my butting in for everyone’s sake.

Overall, this experience made me think about the balance of our personalities in this marriage. Brian said it best when speaking about us at social events or parties. He lets me go like a wind up toy while he sits back. Once I’ve worn out, he collects me and we go home. It is a pretty funny analogy. It’s true in some respects. Brian is more mellow and quiet. When we go out he likes being more stationary, grabbing a drink and having really thorough and meaningful conversations with the people approaching him. I , however, take after my grandmother. I like to be where the action is. I’ll make my rounds around the party, wanting to get to hear about everyone and what they’ve been up to. I think what is great about being so different is that he is the ying to my yang. Neither one of us is better or right in the way we approach things, just different. I’ll dream big and he’ll pull me back just enough so that it can become a reality. 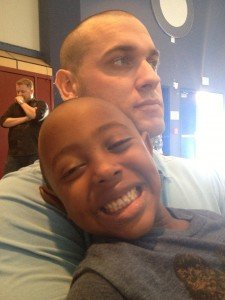 Not every happy marriage seems to be the same. I know some of our good friends literally married their other half – they could be twins. They are so alike it is crazy, and works! I guess that is the great thing about marriage. There are so many ways another person can uplift you and test your strength all at the same time.

What is your marriage like? Are you married to your twin, or your complete opposite? Or maybe something in-between?