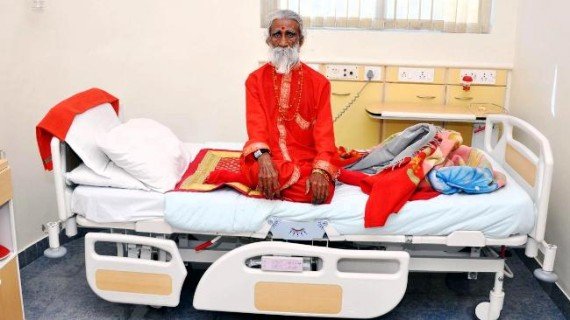 There is a man in India claiming he has not had any food or drink in 70 years!

Jani claims he went to live in the jungle when he was seven years old, and at eleven years old had a religious experience that now sustains his life without food or drink.

In 2010 his 15-day observation in a hospital in Gujarat was monitored by both Dr. Sudhir Shah and biologist Dr Ilavashagn, director of the Defence Institute of Physiology and Allied Sciences, a department of the Defense Research and Development Organization.

A glass wall was created for Jani’s room, a video monitoring was set up, and the toilets were sealed (Jani claims he doesn’t need to urinate or defecate).

They found urine in his bladder, but he did not pass it, so doctors believed he reabsorbed it into his body.

He was allowed to rinse his mouth out with mouthwash. but it was measured after he spit.

After 15 days of no food or drink, the doctors monitoring Jani claim he is in the health of someone half of his age.

Well, the Indian Rationalist Association is crying foul. They claim that kind of mysticism could cause copy-cats and potentially harm people. They also were denied access to the study with their own independent team (twice).

They believe Jani is not as closely-monitored as the researchers watching him claim.

Regardless, the fact that this story exists at all is totally strange!

What do you think? Is Jani a true holy man? A medical anomaly?  Or is he trying to trick us all in the name of religion?