Home > Let’s get this straight: Attachment parenting is not a “trend.”

Let’s get this straight: Attachment parenting is not a “trend.” 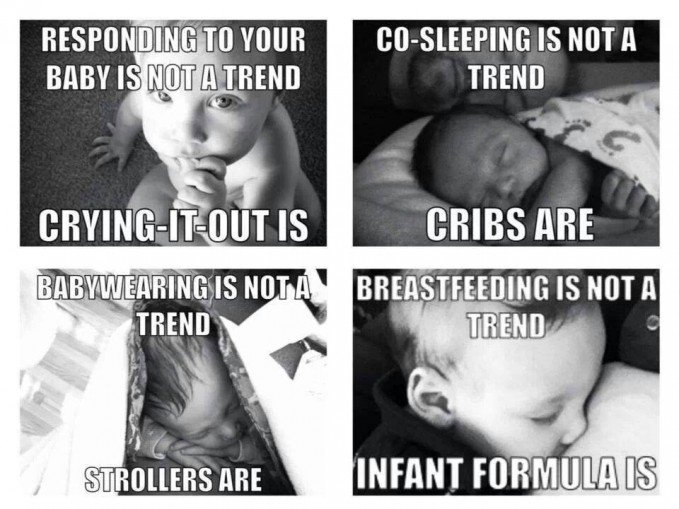 I saw this meme getting passed around on Facebook, and it makes me kind of want to say a thing.

You see, we sciencey people, we kind of have a love/hate relationship with memes. On the one hand, they can be really good at visually or succinctly illustrating a scientific concept in a way that often scientists cannot. But by virtue of their succinctness, they often oversimplify what is actually a complicated issue, or falsely represent the science behind it.

However, that is not the case with this meme. This meme is simply true.

People call “attachment”-style parenting a “trend.” And on a micro scale, if you note the rise in popularity of the “Dr. Sears” books, it is. In white suburban America, it’s a little bit counterculture. But to talk about cosleeping, babywearing, and long-term breastfeeding as if they are abnormal or fringe…I have to admit, that always sort of rubs my evolutionary and statistical brain the wrong way.

And if you rub my brain hard enough, eventually some science gonna pop out.

Yes, humans have existed, in their current form, for 200,000 years. Strollers have been in widespread use for about 175 years. Most human dwellings did not have more than one room until about 200 years ago, so babies necessarily slept in the same room as their parents before that. And infant formula hasn’t even been in widespread use for 100 years yet. In short, these memes describe the standard practices for what amounts to, at minimum, 99.95% of human history.

However, many pediatric anthropologists would go further and assert that to speak of a “revival” of these practices is hardly descriptive of the reality.

Early infant weaning is still mostly only prevalent in highly Westernized countries. And cosleeping is still practiced in most of the world — most of the U.S., even. About 67% of American parents cosleep at least some of the time. Anthropologist Susan Abbott writes that cosleeping “is not some kind of quaint hold-over from an archaic past, nor is it pathological in its constitution or outcome for the majority of those who experience it. It is a current, well-situated pattern of child rearing that is withstanding the onslaught of advice by contemporary childcare experts.” And infant carriers such as mei tais have continued to be used in Eastern Westernized countries despite the availability of strollers.

So let’s just nip this thing in the bud, already. Parents who do this stuff aren’t being hippies. They’re not being “progressive.” And they’re certainly not spoiling their kids. They’re practicing evidence-based parenting by working with their child’s evolved physiology to simultaneously make their lives easier and optimize outcomes.

^^ And that, my friends, is what you tell your critical mother-in-law next time she passive-agressively comments, “Wow you’re still nursing!?”

P.S. I can’t tell what kind of carrier is being used in that lower-left meme, but it looks like it might not be safe? Please always pay attention to the rules of safe babywearing!

Nov 21, 2015Jamie
Our favorite Richard Scarry books get modern updatesMom puts breastmilk under a microscope and shares the amazing video