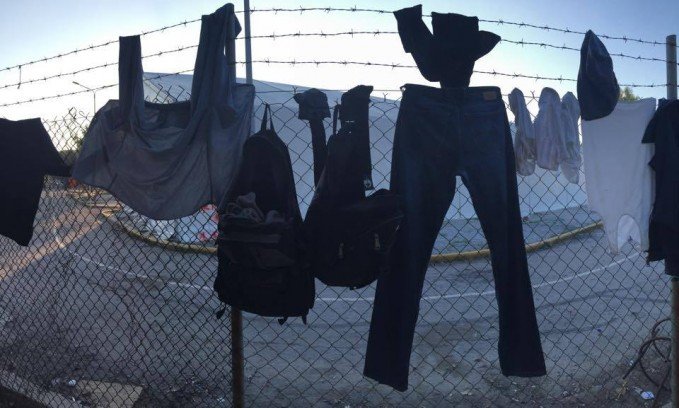 I asked my friend “Rasheed” (from the most recent live stream) if he was dressed in his own clothes. He looked at me and said, “No, mine were too wet.” Later in the day, he stopped and pointed out where his clothes were drying, so I snapped a photo. I wanted to show this because there was a dignity element to this part of the story that I didn’t understand until I came the Lesvos. I spent the entire day with seven men who were the exact age as my brother when he was killed. It was a surreal experience for me because I had connected on so many levels with these men emotionally, especially Rasheed. To me, they were people I would go out in Los Angeles and have dinner with… real friends is the best way I can articulate it. I guess there was a shift from distant observation and sympathy, to true connectedness and empathy. It was then that I thought to myself, sure they were dry, but they had lost everything, and it was then that I understood the feeling of shame and frustration associated with not even being able to wear your own clothes that you picked out yourself for style, function… Etc…
All I wanted to do was give them the dignity that they deserved. They hadn’t eaten in days (yes, plural) and had missed the free meal distribution because they were so engaged in telling their story to us. That is when Jade Beall and I felt compelled to feed them, and it was again with attempting to retain their dignity, that they adamantly said no (they wanted to feed us, not the other way around). We felt bad even pushing it, but the mothers came out in both of us. It wasn’t until we explained that we are mothers to boys, and we would want other mothers to do the same for our children if this even happened to them, that they accepted.

At the end of the evening, Rasheed and the other men had to leave to make their Ferry to Athens. He kissed my hands, held them, and quietly broke down in tears… I am a very stoic person, and this was the first time I had cried at all during any sort of aid mission… I didn’t want him to leave my sight because I didn’t know what was going to happen to him when he left. I just kept thinking how easily he could have been my brother and also thought about incredible journey he had just been on… and he isn’t even the halfway point. He is risking everything out of necessity and the Western World is giving him and every other refugees so much uncertainty that it leaves me disappointed and ashamed. Human beings deserve so much more than this.
If you want to see if ISIS is winning, check out how many places are now opposed to refugees entering their regions after the Paris attacks and you’ll have your answer. It is naive to believe that allowing refugees in to our countries is suddenly making it possible to terrorist groups to infiltrate. They are there now and they will continue to come even if we don’t allow refugees asylum… So why don’t we show our humanity and stop allowing ourselves to be used by terrorist groups.
Western culture perpetuates rape culture and that is exactly what all of these groups are using as fuel.

Stop victim blaming and be proactive.