Home > Is There REALLY a Secret Starbucks Menu? I Found the Answer!

Is There REALLY a Secret Starbucks Menu? I Found the Answer! 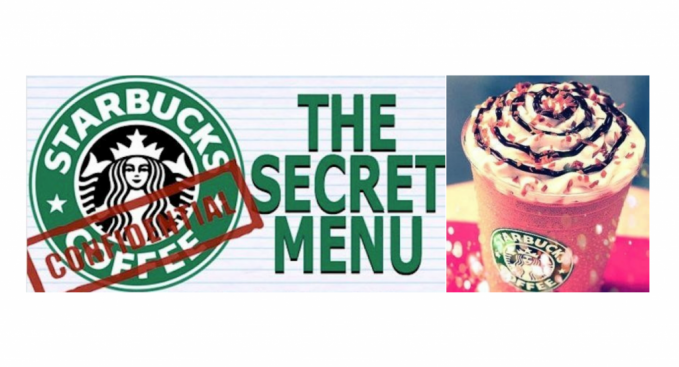 Images and text by Ginger.

Like many of you, I’ve seen the article about the 19 Secret Starbucks Drinks You Didn’t Know About.

Here are the tantalizing drinks mentioned in the article:

A vanilla frap with 2 pumps of raspberry. My favorite summer beverage!

A Vanilla Bean Frap with java chips and a banana blended in.

Order a Coffee Frap with cinnamon dolce syrup, honey and a pump of vanilla!

A Green Tea Frap with peppermint syrup and java chips.

A Strawberries and Cream Frap with java chips and mocha syrup.

Start with a Strawberries and Cream Frap, and add raspberry, vanilla, and classic syrup.

Chocolate Chip Frap, with hazelnut and mocha syrup blended in.

A half cup of Valencia Orange Refresher with peach syrup will taste just like a gummy peach ring!

Order an Iced Latte and have them make it with raspberry syrup instead.

Get a Green Tea Latte, and add chai syrup.

Get a Toffee Nut Frap and top it with sea salt to taste.

Just ask for a half White Chocolate Mocha, half regular Mocha Frappuccino with raspberry syrup.

Being the Starbucks junkie that I am (yes all the baristas at my local Starbucks know me, my husband and our kids),  I knew I had to run over there and show them this article, to ask if it’s true that they have this “Secret Menu”.

So I asked them. Is it true? Well… NO.  They do NOT have this secret menu where you can ask for a Cotton Candy Frappuccino and they will know what you are talking about. Do they have “in-house” drinks that baristas have come up with on their own? Sure. But this isn’t it.

HOWEVER, if you are a regular Starbucks customer, you will know that they often customize drinks for you. You can ask for a “grande half-caff, no whip, triple shot mocha frappuccino”, and they will do it. And the same goes for these drinks.  They do NOT know the names of these drinks in this article. But if you ask them for a Vanilla Frappe with two shots of Raspberry, they can do that, and then you will have your “Cotten Candy Frappuccino”.

So what did I order? I was GOING to order a Banana Java Chip Frappuccino.  But after talking with the baristas, and learning the truth from them,  I asked if they could make me a Vanilla Bean Frappe with java chips and a banana added in (as described below the drink in the article).  The barista said he’d never made it before, but he would make it for me.  Due to the volume of the added banana, I got a grande in a venti cup.  (and I don’t like whip, so I asked for it without.)  What did I end up with??? This yummy drink that I will definitely ask them to make again!!!

As I was leaving, one of the other baristas asked me what name they called this drink in the article, and I told them Banana Java Chip Frappuccino.  They are obviously curious about this news going around as well.

So… this is NOT a secret Starbucks menu, but if you want them to customize a drink for you, bring the article with you so you have the recipe to tell them what you want.  And please be nice to the baristas by waiting for a time where they are not so busy. No one wants a rushed custom drink the barista is making for the first time.

I’ve already tried the Banana Java Chip Frappuccino from the list, and I rate it a 5 star drink, as in I will definitely order that again.

Now here’s the REAL question: Do you want me to try the rest of the drinks on the menu and rate them?

OR… Do you want me to try the rest of the drinks on the menu and rate them? *wink*

Mar 20, 2015Jamie
It's Okay to Not Be Excited About an Unplanned PregnancyVideo: Ken Jeong of the Hangover Took the Role for His Wife Who Was Battling Breast Cancer