I have to admit, I was a little shocked when I saw all of the fuss getting made over Kate Middleton’s postpartum body. I don’t think I was the only one. 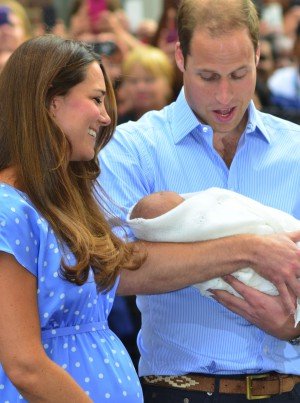 I remember being in the operating room and they had just delivered 2 month premature Aram and whisked him away and Brian went with him (which reassured me he was being cared for). I was alone with two nurses that were possibly preparing to move me. My blood pressure at that moment was around 220/180 and I was in what I know to be full survival mode. It was strange attempting not to panic because it would raise my blood pressure and be the tipping point to make me stroke or seize, but then also sitting there with the understanding that my pressures were high enough to make me have a stroke anyway. Essentially waiting for it to come, without being scared, was like torture.

The women were moving my body and one of them looked down and gave an audible gasp-like whisper and began quietly talking to the other. I started tearing up. Something was really wrong.

The nurse’s both realized they had frightened me and replied, “Oh, nothing your stomach is just flat.”

What I know now was to be taken as a compliment in our culture, I took as the biggest reminder of my own inadequacy.

I…my body… couldn’t keep my baby safely in my womb long enough to give any reminder that he existed inside of me even moments after his birth. I couldn’t stop thinking about that. My body didn’t look like a normal postpartum woman because my body failed. My body failed to keep my own child safe during a crucial moment in his existence. The all-over unhealthy bloat from a sick heart, the lack of proper developing placenta, the start full renal failure, or the early delivery gave this pregnancy catastrophic results that resulted in terminating it 2 months early, yet the only thing being mentioned by my nurses was the lack of normal fluid retention in the abdomen region in this premature birth?  (Make no mistake, we are the fortunate ones in this scenario. Both mother and baby came out of this alive and healthy, and we know in many cases like ours, that is not the case.)

The nurses’ reactions during this extremely emotional and very unstable time was what was perplexing. Was the normal average (and healthy) postpartum stomach so taboo that these women felt this kind of comment was really going to be welcomed? Maybe.

That is why I am hoping to present the idea that we need to take all of this a step further in normalization. Right now, our culture sees the postpartum body as an acceptable defect, and it wasn’t long ago that pregnancy was looked at the same way.
Demi Moore outraged many when she posed on the cover of Vanity Fair nude and pregnant. This photo helped normalize the view of the pregnant woman as positive and still sultry. This was no longer something to hide, but to celebrate.

That is where we need to get with the view of the normal/typical postpartum body. We need to see the  visible postpartum body as beautiful and also sensual. It is a sign that the cycle of healthy reproduction, something so important for the future of humanity has taken place and was recently completed in this one case. Now, there is new life and that is a blessing.

So, rather than viewing the woman revealing her postpartum figure as heroic, we need to take it further. Let’s make our reaction, “Of course she would! This is something worthy of a celebration. It is beautiful and healthy, just like the pregnancy body is seen as beautiful. This is a sexy and beautiful part of womanhood. It is so fleeting, and this tender time should be enjoyed and celebrated.”

*We have received numerous emails asking more about HELLP Syndrome. Although it is extremely rare, it is important to know and recognize the signs and symptoms*

The cause of HELLP syndrome has not been found.

HELLP syndrome occurs in about 1 to 2 out of 1,000 pregnancies, and in 10-20% of pregnant women with severe preeclampsia or eclampsia.

Most often HELLP develops before the pregnancy is 37 weeks along. Sometimes it develops in the week after the baby is born.

Many women have high blood pressure and are diagnosed with preeclampsia before they develop HELLP syndrome. In some cases, HELLP symptoms are the first warning of preeclampsia and the condition can be misdiagnosed as:

Here are the symptoms along with what I personally experienced. (If you suffered from HELLP Syndrome we would love for you to share your experience. Personal stories show how much HELLP varies by individual.)

Jul 27, 2013Jamie
A Breastfeeding Story: When you are diagnosed with low supplyReaching for the Sun