Home > Is It Okay To Touch Someone Else’s Child?

Is It Okay To Touch Someone Else’s Child? 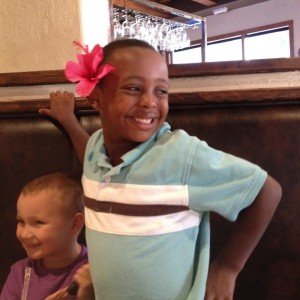 I understand why people want to hold him.

I.F. is a common issue among  adoptees (especially in orphanage or multiple caregiver settings). We haven’t completely worked through this challenge with him, but we have made great progress. Our friends and family now are able to touch Samuel and give him hugs without it causing confusion as to what their roles are in his life.  However, with strangers we still have to be extremely careful.

Samuel does not grasp the concept of stranger danger. Any form of touch one would consider acceptable by a new person (handshake, high-five), he views as the two of you are now close friends. He will then find any form of more personal contact (reserved for close family and friends) acceptable to express with the new person (like holding hands).

This is something we have been working on with an adoption psychologist and many other adoptive families. We appreciate coming together to speak about these issues that are unique to adoption. We have taught children to ask before they have any contact with a stranger (even if the stranger is initiating the contact). Most of the time the answer will be no if it involves any kind of touch (until we know the person better). This teaches Samuel the process of building friendships rather than being everyone’s close friend immediately. ( A heartbreaking thing to teach your child, but essential to keeping him safe in future dangerous situations.)

I have been upset with myself the past few days about a situation that happened at the Getty. Samuel and Aram were on a 4 foot boulder intending to jump down (instead of using the ramp walkway).  I was about two feet away and immediately told them to get down and use the appropriate pathway. Samuel went to get down as I was walking up to him, but then a woman came over (children and husband in tow) and put out her arms with a smile. “Come here!” She said soothingly. Samuel looked confused. I was right there, but this nice woman wanted to hold Samuel and help him down from the boulder. I said a simple “no” and Samuel went to get down, but the woman insisted. By that point Aram distracted me from the situation by asking me a question. Samuel, confused, decided to listen to the nice lady. She helped him down and I stood there silently! I wanted to say something, but I didn’t! I already told him no and to get down with her standing there and she ignored me! I was mad, but because she honestly thought she was helping (or it appeared that way),  I didn’t have the heart to say what she did was acting inappropriately. So, I stared at her blankly (probably with my jaw open) and watched her walk away with her family. I put Samuel back up on the boulder and had him walk down the right way (where he passed the woman walking up it). She watched him walk past her and seemed a little confused.

I was trying to figure out why she would ignore the directions I gave to my child. Did she not hear me? Maybe? *sigh* but not likely, I was two inches away from her. Did she think I was not his mother? That is probable, but she knew we were together, and shouldn’t have subverted my direction to him.

Anyway, I should have said something. I am all for bringing the community closer together and building close bonds with other mothers. However,  picking up a stranger’s child without permission (while the mother is giving him opposite directions) is not the way to go about creating a closer community.

Bottom Line: Initiating contact with an unfamiliar child without permission from the guardian is wrong because you do not know the situation of the family.  I am sure this woman was completely unaware she was a setback in his therapy (regarding understanding stranger relationships). That is the point, she didn’t know, and that is why she shouldn’t have touched him. I understand if a child is hurt or lost- it makes sense to provide that comfort and take on the role of guardian in that moment (if another more familiar person to the child is not there). However, it should not happen in normal situations, and especially not when the mother is standing next to you!

Jun 21, 2012Jamie
Getting Fed To The WolvesHappy Birthday Aram!