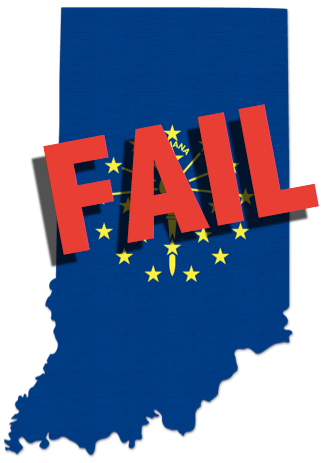 Just in case you need another reason to glitterbomb the Indiana capital building, their government is running another anti-bedsharing* campaign. New design, and more ad money being pumped into it, but same old, oversimplified “just don’t do it kthx” approach. And guess who is behind it: Karen Pence, wife of current national hero and , Governor Mike Pence.

“Keep your baby’s sleep area in your room but not in your bed.”

As I have written before, Indiana health officials have, for years, been ignoring the science being done, perhaps most notoriously in their own state, on the sleep patterns of human infants, bedsharing, and SIDS. They have flagrantly ignored the fact that their campaigns do not work. And most importantly, perhaps most egregiously, they apparently think that parents are incapable of following seven simple rules of (evidence-based) safe sleep, and instead have favored a catchy “ABC” rule where “A” stands for “Alone.” 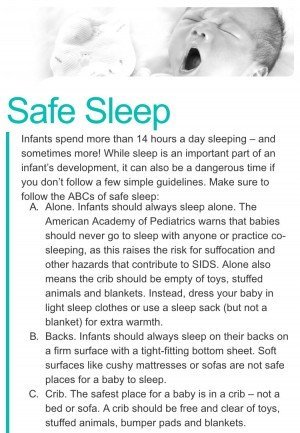 Indiana’s “safe sleep” guidelines. Funny, they mention nothing about smoking, which is one of the biggest SIDS risk factors.

Indiana previously ran a shock-value TV ad (which features a dangerous form of cosleeping, but then ends with the words “Never sleep with an infant, even for a moment”). This campaign, however, thus far appears to be restricted solely to the Internet and print, with Hoosiers seeing it pop up in Internet articles related to parenting and family.

I find it interesting that both the “A” and “C” items in this snazzy little ruleset are oriented towards emphasizing the isolation of the infant…Because, you know, just in case “A” for “Alone” didn’t make it through your thick skull. This emphasis on infant isolation is deeply concerning to those who understand the deep-seated physiological drive that human infants have to be near their parents, and how remarkably adaptive this strategy is. Closeness to parents allows the infant, especially while it is still young, to conserve energy that might otherwise use to maintain their body temperature. This energy can then be devoted to growth and development. Also, closeness to baby also assists with breastfeeding, which well known to have a tremendous impact on infant health.

Proximity is so essential, and so universal outside of Western culture that, when shown a photo of an American infant lying in a crib or infant seat, non-Western people feel sad for the baby and remark, “Where is the mother?”

This campaign is part of a larger initiative called “Labor of Love” directed at decreasing infant mortality. It features beautiful new logo, and the idea is great. However, the campaign lacks the comprehensive approach required to deal with some of the complex issues related to infant care. Regarding bedsharing, the website writes:

Although it’s tempting to cuddle with the baby while sleeping in the same bed, co-sleeping puts your baby at risk for suffocation and SIDS.

This statement is demonstrates a misunderstanding of the definition of SIDS, and the risks and benefits of various sleeping arrangements. Bedsharing (which is the word they would have used if they’d read the research), when done unsafely, is associated mostly with a risk of suffocation. This is a separate diagnoses than Sudden Infant Death Syndrome (SIDS), which is most closely linked with genetic and brainstem abnormalities when all other risk factors (such as SMOKING!!) are controlled for. SIDS happens in all sleeping arrangements. The only public strategy that has significantly reduced SIDS is the “Back to Sleep” campaign, which encouraged parents to put their babies to sleep on their back, and resulted in a 60% reduction in occurrences in the United States.

The Labor of Love website also links excessively to the March of Dimes website, which is inconsistent in its recommendations on cosleeping. The information on other factors is okay, such as stressing the importance of prenatal care. (Yay!) However, regarding breastfeeding they merely instruct mothers to do it, without any discussion of the many social barriers to breastfeeding and where to turn if you run into them.

Why does Indiana insist on ignoring the science on these complex parenting and family issues, even while one of the most highly regarded researchers in this area, James McKenna, carries out his work in their own state, at Notre Dame? Your guess is as good as mine.

In the meantime, we do have researchers organizations dedicated to providing evidence-based information on safe infant sleep to the public where the government fails to. We love the following authoritative, evidence-based resources:

For more on this topic, check out my last article on this issue.

*(Reminder: scientifically, the term “cosleeping” refers to any situation where the baby sleeps “within sensory range” of the parent, such as a crib in the parents’ room. “Bedsharing” refers, specifically, to same-surface sleeping. This is the language we use on IANtB)

Apr 1, 2015Jamie
How to Tell If You're a HypochondriacEngineer dad turns his baby's birth into a moving tribute to STEM