Home > Could You Unintentionally Make a Lie Go Viral?

Could You Unintentionally Make a Lie Go Viral? 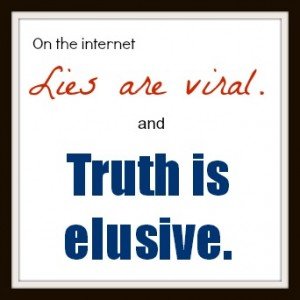 68 < that’s how many times our inaccurate infographic was shared today.

Seven months ago, Jamie and I were discussing the topic of a post she was writing about the inaccuracies she recognized in media reporting. Even reputable media sources report inaccuracies in information or bend information to make it “sell”. Media outlets use “expert” sources who actually have no real background in their field or who are compromising their professional ethics by commenting on certain topics. At the time, Jamie really wanted to make a statement about inaccurate information on the internet, but she wrote that post and we left it alone for awhile.

About two months later, she brought the topic up again. We ranted and raved, but had no real way to attack the problem. Then, another two months later, she pointed out the rampant inaccurate infographics online. It was then that we decided we should make an inaccurate infographic and throw it out to our readers to make a point. However, I was skeptical. I knew it would get shared — “I Am Not the Babysitter’s” Facebook page is well-respected and no one would think to question it. I didn’t think anyone would notice and we’d just have to point it out and it would be lame. So, we decided we would have to make it obvious. The infographic would have to contradict itself blatantly in order to be a really good study and make a really good point.

We waited for the right topic to come along. We wanted it to be something we thought people would really click on and read, that way we could see if they noticed the inaccurate infographic. Nothing seemed appropriate, and Fayye Foundation was doing big things, so we didn’t want to distract from any of those posts. Finally, I told Jamie I wanted to write about maternity leave after she appeared on “The Point”. She immediately piped up, “That’s the post for our graphic!” I fought her a little at first. I didn’t want to belittle the topic of maternity leave, and she agreed, but we ultimately decided this was the perfect opportunity to reach our international Facebook fans. We searched for information and brainstormed about how to make the infographic seem real but still be blatantly inaccurate enough to possibly have a reader catch it. When we happened upon this outdated information being linked to multiple times and misquoted, we were inspired. 3 hours, 2 phonecalls, and approximately 7 picmonkey drafts later, this was born: 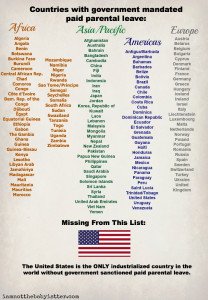 This is an important topic, and you can read more about our thoughts on it here, but if you’re interested, all of these countries have some sort of unpaid maternity leave. However, currently, the United States in the only industrialized country in the world that has no mandate for paid parental leave.

When we posted the inaccurate infographic in the blog post, no one commented. I called Jamie and lamented. We were both admittedly disappointed that no one had noticed, but we had a back-up plan to post it larger as an image on Facebook the next day.  When Jamie posted the infographic on Facebook, the very first comment was someone who noticed the discrepancy. I was in meetings all day but Jamie called me 6 times trying to catch me — she was surprised and pleased that her readers are discerning. I think you all renewed Jamie’s faith in the general public today.

Unfortunately, it wasn’t all good news. The inaccurate infographic has actually been shared 68 times. Which means, it is incredibly easy for even blatantly inaccurate information to go viral. The moral of the story: to quote our friend Nicholas Mayhew…FACT CHECK, PLEASE.

Kendall Hoover is a web content and non-fiction editor who helps bloggers make money on their blogs and improve their pagerank. She is also Secretary of Fayye Foundation and is passionate about pre- and postpartum care for mothers. She is a military spouse and mother to one toddler son, so when she’s not reading or writing, she’s the project assistant on elaborate Lego projects.