Home > Should Humans Model Their Diets after Other Great Apes?

Should Humans Model Their Diets after Other Great Apes? 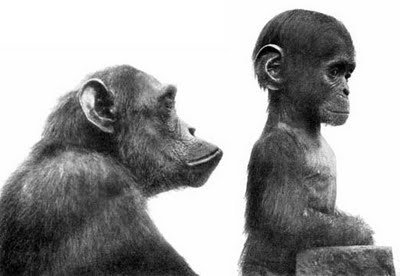 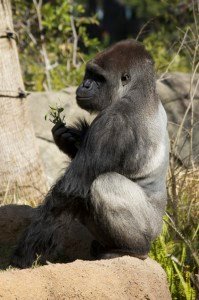 There is much debate over whether humans should be eating like their closest living relatives.

About 5 to 8 million years ago, human and modern-day great ape species diverged. As long ago as that may sound, evolution of a species is a very slow process. That is why many diet fads are attempting to look to the past for information on how to eat today.

I’m currently reading Eat to Live by Dr. Joel Fuhrman, and much of what he promotes sounds similar to an updated diet modeled after modern-day non-human great apes living in the wild.

The Paleo Diet also has a similar concept of looking at our (in this case, human) ancestors of the Paleolithic era as a gauge for what a healthy and biologically normal diet for a human should be. Of course, prior to modern medicine and technical advancements, the average lifespan of a human in the Paleolithic era was around 35 years old, and on top of that not very cheery news,  researchers do not know for certain what people of the era ate. However, I do not think the concept is one to toss out completely. In my opinion, the Paleo diet has the most substance of all the“fad” diets out there.

I think the best thing we can do is to collect this information and apply it to our lives as it makes sense. There are reasons we should not suddenly start following the exact diet of a gorilla. For example, a gorilla’s digestive tract is much longer than a human’s digestive tract, which suggests that gorillas would lean more toward the herbivorous side than humans. Also, unless you want to start eating your own droppings you are going to either need to get your vitamin B-12 from an animal source, or make sure you are taking a supplement. 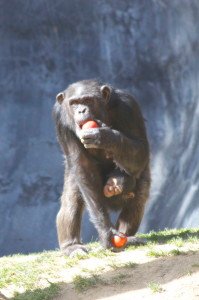 One way great apes can teach us how to eat is by showing us what health problems arise when not eating a diet in the wild. Captive great apes notoriously are afflicted by heart disease (Nim the Chimpanzee is one of many cases). Of course, well-intentioned humans are feeding them this diet and building these well-thought-out living spaces. The same species responsible for building these structures and feeding these apes has a poor track record in the heart health department.  The leading cause of death in America is heart disease. And with that, I think it is safe to say that humans know how to do heart disease, so much so that we are pretty much giving it to our captive primate relatives.

If you think about it, modern humans are living in “captivity” and this is why observing the health conditions that plague both modern humans and captive non-human great apes will probably point us to what we are doing wrong.

The first problem is a sedentary lifestyle. There is no foraging for food that would take up the majority of the day anymore. There is a lot of sitting, eating, and socializing. (Sound familiar?)

The other issue is the lack of diversity in the captive great ape diet. The lowland gorillas’ diet has been observed as containing over 200 different types of plant species and 100 different fruits. To feed captive gorillas this type of diverse micronutrient-rich diet would be nearly impossible.

Gowever, gorillas and other great apes are extremely adaptable. Each species has living conditions that can vary significantly,  but they *almost* always have ways to thrive in each circumstance. Gorillas seem to hit their adaptability limit once humans force upon them a sedentary lifestyle with a poor diet which they have since shown clear signs of their failure to thrive.

Cleveland Metroparks Zoo took the heart health of their gorillas seriously and began changing their diet to see if the health of the gorillas improved. The new diet consisted of double the calories, but was full of leafy greens, bark, green beans, flax, and even multivitamins. The zoo staff made sure to spread the food around the enclosures for a foraging effect that would take about sixty percent of the day to find and consume.

The result for each gorilla was a significant 65lb heart-healthy drop weight and now the zoo is looking into how to properly/naturally exercise the great apes who live at the zoo. When in captivity, it takes more creativity to try to reproduce a natural diet and exercise routine, but MetroParks Zoo is learning and I think we can, too.

Non-human great apes eat very little meat. Additionally, recent research has uncovered that Neanderthals once thought to be strict carnivores are now thought to have incorporated more plants in their diets (even possibly cooking vegetables). Plants are important!

It’s not enough to focus on a couple of different kinds of fruits and vegetables. Eat a variety of species and don’t neglect healthy fungi and root vegetables! 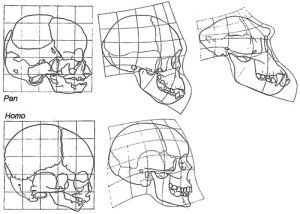 Most of us don’t have a problem finding food, but that isn’t necessarily a good thing for our species. One of the theories for why humans have heightened intelligence and our body structure looks almost juvenile (neoteny) compared to other great apes is the Nutritional Neoteny Theory. During the Plio Pleistocene period (5 million years ago) there was an ecological change that caused dietary restrictions which lead to changes in physical development, increased longevity, and proportionately increased brain size relative to body size. Food scarcity is not something we should be longing for , but there is something to be said for foraging and not having readily made meals at our disposal. What is a modern-day human to do? Plant a garden and/or eat several times a day (mostly plants!)…

Aug 6, 2015Jamie
10 Most Unique Restaurants from around the WorldTarget Takes a Big Step to End Gender Division in Its Stores