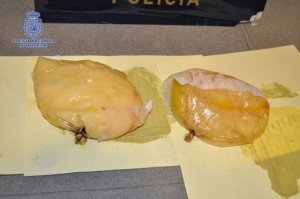 In December, a woman flying from Colombia to Spain was going through customs at the Barcelona airport, when authorities noticed she was bleeding from under her breasts. When they questioned her about it, she said she had just had a breast augmentation surgery.

Since the woman had come on a suspicious flight, and security felt she was acting strange, they sent her to the hospital.

That was where medical professionals uncovered 1.4 kilos of cocaine in her new implants.

Apr 2, 2013Jamie
An Experiment in Creativity - My Son's Blue HairPreventing Autism: A Giveaway