After Brian and the boys left to go back to the US, I stayed in South Africa and met up with my best friend, Bryan.

Bryan has been my best friend since I was 13, and is familiar with being my roommate on random road trips, but this was the biggest trip we ever did together, and he, in my mind, is almost a saint after what we put up with.

When rooming with someone who is essentially a brother, there are still (at least for us) some gender specific boundaries that would be weird to cross, but this trip tried to test that.

I traveled from the Johannesburg airport to some random hotel where Bryan had been attempting to sleep off his jet lag all day.

They couldn’t find my reservation, I didn’t have a working phone, and, in my head, I was cursing out my buddy, Terry, (who was only guilty of graciously organizing the trip for free)…and suddenly they found the the reservation, gave me the key, and all was well again.

I should have opened the door with “Look out Bryan, it is going to be a wild ride.”

However, I entered the door to Bryan in the bathroom and what appeared to be a giant single bed.

Me: “Dude, they were supposed to give us two twin beds.”

Bryan: “Those are two twin beds…they push them together around here.”

Bryan: “Don’t worry, I called and they are bringing what sounds like a cot up here.”

The night progressed with Terry’s brother coming to host us (aka, make sure we wouldn’t be killed by our stupidity and unfamiliarity of the area), testing the pleasant side effect of our altitude sickness medication (it prevents hangovers)…and finally, watching a whole lot of Rugby.

We woke up early and were taken back to the Johannesburg airport where I had a wave of anxiety.

Bryan: “Are you on your period?”

Me: pretending to be offended, “No!”

Bryan: “Look, I know you are missing your family and you feel torn because you are doing something you feel called to do over here. Everything is going to be fine, that is why I’m here. Don’t worry.”

Bryan’s positive reinforcement had me feeling a little better as we navigated our way to Ethiopian Airways to check in. However there were two men were standing there, and did not look happy.

My anxiety started to perk up again as I pondered why they were whispering and glaring at the line.

Me: There is something off with those guys. I think they are up to no good.

Bryan: “Jamie, they are standing to the side; it sounds like their flight got cancelled or something. That is why they look so pissed off.”

I decided to take matters into my own hands.

I walked over to them and smiled and told them I was sorry and I hoped their flight would be taken care of soon.

My overly happy remarks were met with silence and disdain.

Me: “Sweet Jesus, they are terrorists!”

Bryan: “Why would you say that?”

Me: “I just know; they didn’t smile at me when I was trying to talk to them.”

Bryan: “Wow, they didn’t pass the smile test? Has the CIA recruited you to their anti-terrorism intelligence department?… because they should. That kind of skill could be protecting the country…wait no…the world!”

Bryan: “Seriously Jame, don’t give yourself that much credit. Those guys are mad because their flight got screwed up and they’re stuck and some happy little girl popping over to try to make them feel better probably just irritated them more.”

Me: “Thank you, jerk. However, I think I’m delightful to speak with in times of trouble.”

Bryan: “Did your period start yet?”

Me: “I don’t think we should get on the plane, what if their flight gets corrected and they carry out a horrible plan?”

Bryan: “Oh my God…Seriously, if I upgrade us will you stop talking about this?”

And here we are in our upgraded seats: 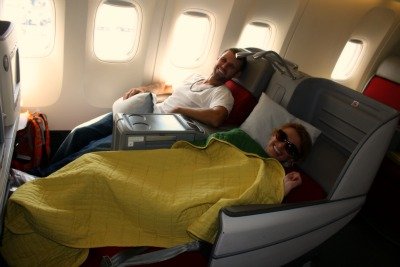 Strangely… It did make me feel better.