While Bouldin later corrected herself and admitted the bill does contain an exemption for breastfeeding mothers, her male colleagues had already gone on the attack. And the things they said were the epitome of rape culture.

State Rep. Josh Moore (R) believes that if your nipple is exposed then men should be allowed to grope you at will.

If it’s a woman’s natural inclination to pull her nipple out in public and you support that, than [sic] you should have no problem with a mans inclination [sic] to stare at it and grab it.

Moore went on to make a comment about how he cares more about protecting a woman’s innocence than the women’s rights movement. To which Bouldin quite brilliantly pointed out his lapse in logic.

My nipple isn’t my innocence. By the time I had cause to whip it out in public (WHEN FEEDING MY CHILD) I was certainly no longer a virgin.

This is the point at which State Rep. Al Baldasaro (R) felt it was a great time to let Amanda know that her nipples would be the last ones he’d ever want to see. For good measure, he also decided to call her a pervert. 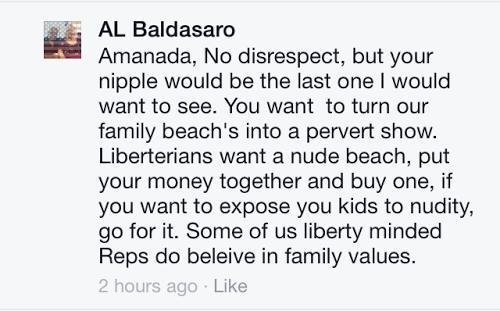 Moore has since removed his comment, but Baldasaro continues to defend his words, when reached for comment.

I stand by what I said. You’re damn right it would be the last one I want to see. I’m a happily married guy. She sits right in front of me at the State House.

The reason this bill is being introduced is that it is currently legal, in New Hampshire, for all people to be topless in public, regardless of sex.

Bouldin believes that as dangerous as this bill is the bigger problem is the reaction to her opinion on it. She says that her points are being discounted solely because she is a woman.

This is bad governance, plain and simple. The merits of the bill have nothing to do with the flesh between my thighs.

I couldn’t have said it better myself, Amanda!

Dec 31, 2015Jamie
'Glee' star and new mom Naya Rivera Dorsey speaks candidly about her breastfeeding struggles and successesCommon Household Pests And How To Get Rid Of Them