Overbearing father, Stephen Stewart, purchased ad space in Christianity Today to find his daughter a spouse, specifically mentioning the 26-year-old’s virginity status. As weird as that may sound, it gets worse! The ad was run in the employment section. 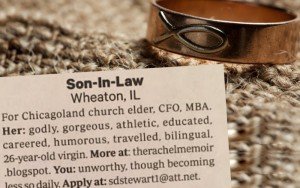 I’m just nervous if this doesn’t work out, next I’ll find my face plastered on a billboard. Oh gosh, now I’m giving him ideas.

Christianity Today has apologized for running the ad but since it’s a print publication they cannot retract it.

We want everything in our magazine to reflect beautiful orthodoxy, and this ad did not…We have taken a hard look at our ad review process, made some changes, and we can assure our readers that no ad like this will appear again.

A month before Valentine’s Day Stephen had warned Rachel that he planned to invest, financially, in finding her a spouse. Rachel must have assumed he was putting together a dowry since the advertisement shocked her. She did confront her dad but he insisted he made the right move and being the perfect woman who follows her current owner she went along with it.

No word on what kind of responses Stephen received or if Rachel has been sold, excuse me, married yet.